Group photo of Lamb of God

(RNS) Muslim-majority Malaysia has canceled a performance by American heavy metal band Lamb of God because the group allegedly offended Islam by singing about the Quran several years ago.

Malaysia’s latest ban on foreign entertainers who violate Islam follows the 2012 cancellation of a concert by American singer Erykah Badu when authorities saw a photo of the Arabic word for “Allah” written on her skin.

“It is very evident (and a bit frustrating) that the groups, parties and powers that have taken the most offense to our music and lyrics, have themselves only made a passing glance at the content and meanings of those songs,” Lamb of God said on its Facebook page.

Livescape Asia, the Malaysian company that arranged for Lamb of God to perform on Sept. 28 in the capital, Kuala Lumpur, said the ban tarnished the organizer’s reputation and caused financial losses for everyone involved.

Lamb of God, from Richmond, Va., had three albums in the top 10 of the U.S. charts, The Associated Press reported.

The band’s other September performances, in New Zealand, Australia and Thailand, will go on.

In 2005, Lamb of God released an album titled Killadelphia under Sony’s label that began with an “Intro” with lyrics seeming to praise the Quran and Allah.

“The Most Gracious / Teacher of the Al-Quran / Creator of the human beings / He taught them how to distinguish / The sun and the moon are perfectly calculated … O humans and jinns, which of your Lord’s marvels can you deny?” the lyrics state, according to the text posted on the Internet.

The same year, the Forum in Los Angeles canceled a Lamb of God performance “after the venue’s owners, the Faithful Central Bible Church, learned that the band formerly went by the name Burn the Priest,” the Los Angeles Times reported at the time. 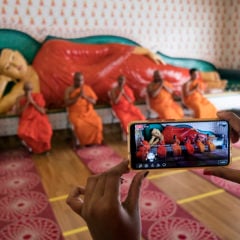 News
Malaysian Buddhists celebrate Vesak from home during pandemic
Follow us on Facebook!
Submit your photos to RNS