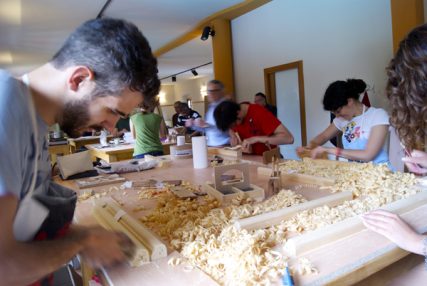 FLORENCE, Italy (RNS) Set in a luscious park along the banks of the Arno River, an art school is trying to revive the tradition of sacred art that made this city the artistic capital of the Renaissance.

For centuries, the Roman Catholic Church was by far Italy’s most important patron of the arts, commissioning the masterworks of Giotto, Michelangelo and Raphael for its thousands of churches and convents.

Even in today’s secularized world, “sacred art is a booming market,” said Giorgio Fozzati, the director of Florence’s Sacred Art School. He pointed to Koiné, a church art and supplies fair held every two years in Vicenza, which attracts thousands of visitors from all over the world.

Just in Italy, 540 new Catholic churches were built in the last two decades. And the church’s many new saints – chief among them soon-to-be-canonized John Paul II – require their own statues and shrines.

“This means there is a demand,” said Fozzati. “The challenge is not to just copy the old masterpieces but to educate artists and artisans capable of reading the tradition of sacred art with a modern language.”

Inspired by Irish sculptor Dony MacManus, Florence’s Sacred Art School was launched in 2012, with funds from donors and support from the city’s archbishop, Cardinal Giuseppe Betori.

The school puts a special emphasis on depiction of the human figure, with students learning the anatomy of bones and muscles just as Leonardo Da Vinci did five centuries ago.

“This is something that has been way too much neglected in contemporary art,” Fozzati said. “Moreover, the human body is very important for Christians; we believe in the Incarnation.”

The first batch of 20 students came from countries as diverse as China, Sri Lanka and the United States. They have learned sculpture, woodwork and goldsmithery, as well as art history and liturgy. 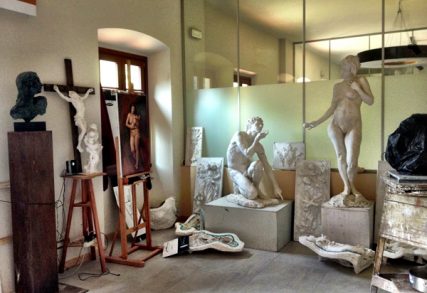 Cody Swanson, a 28-year-old Minnesota sculptor who is one of the Florence’s Sacred Art School’s teachers, has created statues for churches in the U.S. and in Italy, including Foligno’s cathedral near Florence, where his work will be placed alongside that of Gian Lorenzo Bernini. Some of Swanson’s art appears here. RNS photo by Alessandro Speciale

This last discipline is important to allow students to know what Catholic customers – be they priests who are rebuilding their parish church or a school setting up a new chapel – actually need.

The students took several field trips in Florence to absorb the art and the history of the birthplace of the Renaissance. “The whole city is like an open-air museum,” said one of the students.

The students also traveled to Concordia, a small village in northern Italy that was devastated by an earthquake last year, where one of the students designed the winning project for a new tabernacle to house the consecrated  bread and wine of Communion for a local church.

But the most important part of the course is starting in the next few days, when students will spend two to three months busy in the workshops and studios of some of Florence’s most renowned artists and artisans. The best among them will be offered the opportunity to continue working there.

This “bottega method,” working alongside an accomplished master in the master’s studio, “actually yields more results,” said Cody Swanson, a 28-year-old Minnesota sculptor who is one of the school’s teachers.

“Students actually see something from start to finish rather than just studying how things are done.”

Swanson moved to Florence in 2006 to pursue his career as an artist and never left. He has created statues for churches in the U.S. and in Italy, including Foligno’s cathedral near Florence, where his work will be placed alongside that of Gian Lorenzo Bernini.

Along the way, he converted to Catholicism, got married and had four children. “Being an artist, I went to a lot of churches and this gave me an occasion to get closer to Jesus,” he recalled.

Shana Smith, a 24-year-old painter from New York, plans to enter a convent in Rome after a year in Florence. RNS photo by Alessandro Speciale

In fact, for many of the school’s students, the course is a spiritual, as well as an artistic, journey.

Shana Smith, a 24-year-old painter from New York, plans to enter a convent in Rome after a year in Florence.

“I always wanted to communicate God with my art,” she said.

While she admits that even those who don’t believe can create sacred art, “if you have faith, you know what you are communicating. It overflows from who you are and it makes your work more powerful and authentic.”