(1963) A man falls to his knees in prayer amid shattered glass from windows of the 16th Street Baptist church and surrounding buildings in Birmingham, Ala. Four young girls dies as a racist’s bomb exploded at 10:22 a.m. on Sept. 15 during worship services and Sunday school sessions. In the following outbreak of violence throughout the area, two young black men were shot to death. Pleas for effort to stop further bloodshed were issued from government, civil rights and religious leaders across the nation. Religion News Service file photo
*This day in history: On July 24, 1919 a race riot in Washington, D.C. left 6 dead and 100 wounded.

WASHINGTON (RNS) They were among the youngest martyrs of the civil rights movement, four young black girls — three 14-year-olds and one 11-year-old — whose deaths in a church basement horrified a nation already torn apart by segregation.

This week, 50 years after the Ku Klux Klan bombing at Sixteenth Street Baptist Church in Birmingham, Ala., shook hopes for a colorblind country, the four girls are getting their due.

Addie Mae Collins, Cynthia Wesley, Carole Robertson and Denise McNair were posthumously awarded the Congressional Gold Medal on Tuesday (Sept. 10), a day after a piece of shattered stained glass from the church was donated to the Smithsonian.

“This was just a little over two weeks after the March on Washington, which had generated so much optimism for progress of civil rights,” recalled Randall Jimerson, who was 14 when his white minister father scooped up the shards of glass from outside the bombed Birmingham church on Sept. 15, 1963.

“And, now for this event to take place, it just was shattering for us to hear about.”

Jimerson and his siblings made the donation to the National Museum of African American History and Culture, which is scheduled to open in 2015. The museum’s deputy director, Kinshasha Holman Conwill, said the donation fits the museum’s mission of reconciliation and healing.

“This is an extraordinary object in and of itself, commemorating one of the most searing and profoundly shocking moments in our country’s history,” she said.

On Tuesday, U.S. House Speaker John A. Boehner led the congressional ceremony at which the medal was bestowed. Some 300 people, including family members of the bombing victims, attended the ceremony. The medal will be kept at the Birmingham Civil Rights Institute across the street from the Baptist church.

Lawrence J. Pijeaux Jr. (center) president and CEO of the Birmingham Civil Rights Institute, holds the Congressional Gold Medal as it is presented posthumously September 10, 2013 to the four girls killed in the 1963 bombing of the Sixteenth Street Baptist Church in Birmingham, Ala. To his immediate left is the Rev. Arthur Price Jr., pastor of the church, which is located across the street from the institute where the medal will be housed. RNS photo by Adelle M. Banks

“These perpetrators of really what was the worst day in the history of Birmingham…they meant evil,” said Rep. Spencer Bachus, an Alabama Republican. “They were filled with hate. But God took those actions and took that tragedy and turned it into something still tragic, still heartbreaking but resulting in a civil rights movement and a movement for good, for peace, for love.”

President Obama’s speech at last year’s groundbreaking for the museum prompted Jimerson, director of archives and records management at Western Washington University in Bellingham,  to make the donation of the broken stained glass.

For most of the past five decades, the family kept the rosette — with  bluish-green and cream tones — and its twisted pieces of lead in the family’s dining room hutch as they moved from state to state.

He said his jaw dropped when Obama specifically cited “the shards of glass” from the Birmingham church as objects his daughters should see in the forthcoming museum. 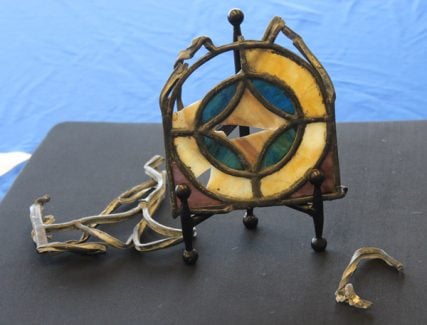 A stained glass rosette and twisted metal from the 1963 bombing of the Sixteenth Street Baptist Church in Birmingham, Ala. The memento was donated to the Smithsonian’s National Museum of African American History and Culture by the family of a white Baptist minister on September 9, 2013. RNS photo by Adelle M. Banks

His father, the Rev. Norman Jimerson, an American Baptist minister who became executive director of the Alabama Council on Human Relations, died in 1995. On the day of the bombing, he and his wife visited the church when they could find no other white ministers to join them.

“She would show this glass and say the twisted glass here is the symbol of twisted minds that would hate people so much to cause such a tragedy,” said Jimerson, recalling the activism of his mother, Melva Brooks Jimerson.

His sister, Ann Jimerson, who has created a website about children who lived in Birmingham in 1963, said the memento’s move to the museum will honor the four girls who died as well as two black boys who were killed in the aftermath of the bombings.

“It was a hard decision for our family to let go of the glass,’’ she said, shortly before she blew a kiss to it as Smithsonian officials packed it up for safe keeping. “I have at least one good friend who kept saying to me, ‘That glass does not belong to you and the Jimerson family it belongs to the nation.’ … It will have a much broader audience here.”