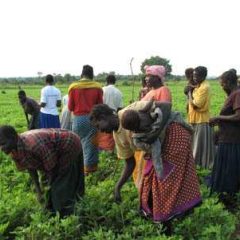 Farmers and war widows tend peanut plants in Uganda. The seeds were provided by Catholic Relief Services as religious leaders of all stripes take the lead in promoting reconciliation in the war-torn country. Religion News Service photo courtesy Debbie DeVoe/CRS

The defense of the international relief agency came in a strongly worded statement released on the first day of the annual fall meeting of the U.S. Conference of Catholic Bishops’ administrative committee Wednesday (Sept. 11).

“The U.S. Catholic bishops stand firmly behind CRS in its commitment to promote and defend human dignity and the sacredness of every human life from the moment of conception until natural death, and at every moment in between,” the bishops said in a statement.

The humanitarian agency has tried to fend off a coordinated attack by conservative critics who charge it works too closely with groups that support family planning policies.

CRS served more than 100 million people in 91 countries last year, promoting education and relieving poverty — an “extraordinary witness to the Gospel of life,” the bishops said.

“Many members of our staff globally have expressed deep gratitude that the bishops have publicly affirmed their support for our work on their behalf,” Rosenhauer said.

On the same day the bishops released their statement, LifeSiteNews called for the bishops to dissolve CRS, citing a recently released report from the Population Research Institute, an anti-abortion, nonprofit research group. Among other accusations, the report charges that CRS staff in Madagascar undermined local bishops and funded organizations that support contraception and abortion — charges CRS denied.

Critics have also taken issue with CRS management of a grant from the Global Fund to Fight Aids, Tuberculosis and Malaria, to supply bed nets for an anti-malaria project in Guinea. CRS distributed the funds to groups selected by the Global Fund, including Population Services International, an organization that supports contraception.

CRS said that the funds for PSI were clearly designated for malaria prevention and that CRS does not support projects involving contraception or abortion.

“Catholic values and teaching are the guideposts that direct our paths to bring God’s love to those in greatest need,” CRS has stated in response to its critics.