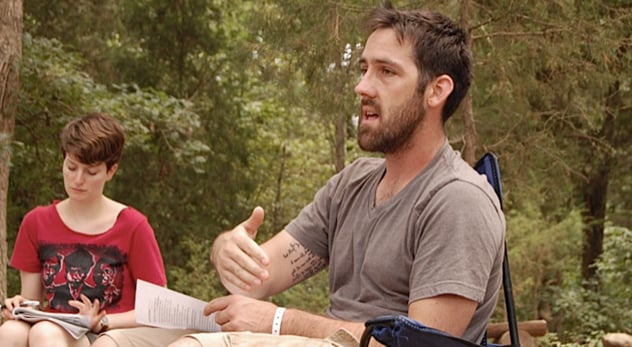 Many across the nation breathed a sigh of relief when President Barack Obama announced he would postpone the Congressional vote on a military strike on Syria. And yet civil war continues in the battered Middle Eastern country where more than 100,000 have already died.

As these events have transpired, I thought about Logan Mehl-Laituri, a former Army Sergeant who changed his status from "active soldier" to "conscientious objector" after serving fiver years in both Kuwait and Iraq. He had come to believe that Christians are obligated not to kill their enemies. But while he will no longer carry a weapon, he did not feel morally obligated to seek discharge from the Army. Since then, he has written two books--For God and Country (In That Order) and Reborn on the Fourth of July: The Challenge of Faith, Patriotism and Conscience--in addition to enrolling in divinity school. Here, we talk about war, national security, and his journey out of the U.S. military.

JM: Logan, can you describe what happened inside of you that caused you to change your status from "active soldier" to "conscientious objector?"

LML: The day after I watched an American soldier die in Northern Iraq, as a forward observer for the artillery in 2004, I walked into the chow hall and saw the movie Pearl Harbor playing on a small TV in a corner. It was the namesake scene where Japanese pilots strafe Hickam Airfield (the same from which I left to come to Iraq 11 months prior). The effect it had was to divest me of any faith I had in modern war to achieve the peace it proposes to pursue. Of course, all of this did not actually hit me right away; it took months to all sink in, but it began that day in November 2004.

As bits and pieces of my faith in war fell away, I found myself understanding my faith in God in deeper and more nuanced ways. Before long, I stood at a crossroads where I could either continue as a forward observer (one of the most destructive specialties in the Army) or confess the Prince of Peace as Savior of the World. I could not have it both ways. Unexpectedly, I was not satisfied with the seeming options before me to either make a hard split from the violence of the Army in which I served or to embrace it whole-heartedly. Neither felt genuine to me, as I had come to have great respect for my fellow service members but I also knew that I could not be expected to kill the enemies I was commanded to love. I actually do not prefer to think of myself as a conscientious objector, since I asked permission to return for a 2nd deployment to Iraq. Instead, I think of myself as being a conscientious participant, a phrase coined by the first objector to be awarded the Congressional Medal of Honor, Desmond T. Doss, a Seventh Day Adventist who served in World War II.

JM: When all this went down, what was the response of those around you?

LML: I describe my path out of the military as I entered the church in my book, Reborn on the Fourth of July, which I knew was unconventional for the modern American military, but I was surprised by the reactions of my fellow Christians nonetheless. By applying to be a noncombatant and return to war, my pastor accused me of abandoning women and children to militant Muslims and my commander accused me of aiding the enemy. A spiritual mentor of mine suggested that the military was God’s hand of judgment in the Middle East, but he also taught me that the journey we call our Christian faith is about love. It is fundamentally a paradoxical path, and I discovered that I still had things to learn from each of these men that were saying such confounding things. Surprise can be a gift that brings profound spiritual fruit, but it took a long time for me to cultivate the patience necessary to see them at that time.

JM: You've said that you believe it is important for soldiers to tell their stories. Why?

LML: Words have the power to create or destroy worlds. In the beginning, it was a word--the Word--that created the heavens and the earth. But when I came home from Iraq in 2004, I felt silence, even if I might not have heard it. I felt nothing, activities that I used to love had lost their appeal. I did not really want to die, but I had no interest in living. The hell of war created a silence in my life, and it does so for many veterans. We cannot speak of what we have seen but with fellow soldiers, a kind of narrative incest. So we need the Church to help us find the words necessary for breaking the silence that so often greets us upon our return from our nation’s longest wars.

Our generation is marked by record numbers of suicide – there are over 22 of us everyday who end their own lives, seeking solace in the ultimate silence of the grave. Though active troops are taking their lives at a record pace, it is not just my generation doing so. The generation that has come before us, who fought in Vietnam and Korea (which is known as “The Forgotten War”), constitute the highest levels of suicide. The American Church has been failing its veterans for decades now, and it is time for this trend to stop.

JM: You've said that "Jesus saved us and war is over." But I see stories of war on the news all the time, and we may find ourselves in yet another war in Syria soon. Can you put some flesh on this phrase? What does it mean?

Putting theology aside for a moment, “war is over” as an homage to the anti-war song “Happy Xmas (War is Over)” written by John Lennon and released in 1971. Music has been integral to my journey of faith, which is the reason I separated my book into movements instead of chapters. In music, movements speak less of a rigid, linear structure and more of a melodic frame, which was helpful to me for understanding my experiences. During my reintegration into civilian life, I relied heavily on a number of musical genres to moderate my moods and give words and imagery to things I felt denied easy categorization. As for the Lennon song itself, bands will frequently cover it during the Advent and Christmas seasons to remind us of the little child who shall lead the nations to peace. Being a Christmas baby myself, who came to eventually oppose war in my own peculiar way, the song has a number of meaningful layers for me.

But theologically, it remembers Stanley Hauerwas’ frequent admonition that Christians should live into the new reality that is now-but-not-yet, the Kingdom of God that was inaugurated by Christ’s death on the cross and yet will not be consummated until his final coming in glory. Though war will persist, however paradoxically, Christians are called to be the alternative to a world at war. Dr. Hauerwas is always insisting that Christians not ‘have’ an alternative, but rather embody the alternative. So for Christians, war is indeed over – it has been defeated along with death by Christ on the cross. We do not live captive to its power, even though it may still exert influence in our lives. Our bodies may expire, but we have eternal life. We are a people of paradox, of eschatological realism – we create the change we want to see by being a people of this kingdom that we simultaneously embody and await.

JM: Yes, but many argue that national security depends on the ability to wage war. This was the case made for war in Iraq and Afghanistan, and it is the case the current Administration was beginning to make with Syria. Are they wrong, in your opinion?

This is a frequent refrain. In fact, you’ll find it in Isaiah 31, where another global superpower similarly trusted in the strength of their military and number of their soldiers. But for Egypt and for America, our security is dependent upon how we treat our global neighbors--friend and enemy alike. Former President and General of the Army Dwight Eisenhower was right to insist that our capacity to be “humble with power” is a better guarantee of our security than our dependence upon our military forces. In a world that sees more American bombs than American democracy, we cannot continue to insist on the size and spread of our army over and above the interests and self-determination of our global neighbors.

JM: You talk about putting God above country. What does that mean to you? Can you paint some pictures for us?

LML: Putting God above country is the proper way to order the loves we have in our life. Loves are not always mutually exclusive, as though we cannot love cookies and ice cream alike. The problem comes when we have to choose between competing loves. Cookies and ice cream might always compliment one another, but God and country sometimes compete. Sometimes our country asks things of us that conflict with God’s plan for our lives, like when we go to war. War is, at best, a necessary evil. It is never what God intends and is therefore not a good. Even in just war traditions, the use of violence is a temporary suspension of peace so that justice might be served. Putting God above country in this case means fulfilling our duty to question war, rather than staying silent simply because it is in the national interest.

In my case, I knew that I could not continue in my particular specialty as an artilleryman. But if I had been a field medic or a communications specialist, the moral implications would have been substantially different, insofar as the degree of expectation to kill would have been much lower. Many combat arms specialties are trained and expected to engage in direct violence, whereas many “combat support” specialties only train in violence secondarily. I frequently find myself reminding both pacifists and just warriors that the modern military is by no means homogenous. We cannot look at two different people in uniform and assume they are morally identical persons. The particularities of military service are incredibly diverse and we should treat people as individuals, not as caricatures of either their best or worst attributes.

Five years ago, I helped organize a group of Christian soldiers and veterans whose motto is “GOD > U.S.” After hearing from innumerable fellow service members of faith, we realized that being a conscientious objector is just one of many ways to love God and country (in that order). One of our founders was in Navy intelligence and never sought discharge. Instead of trying to preach at one another and try to convert one another, we focused on listening to one another, sharing burdens and multiplying joys. As we have done so, it has informed and enriched our own faith in ways we never anticipated.