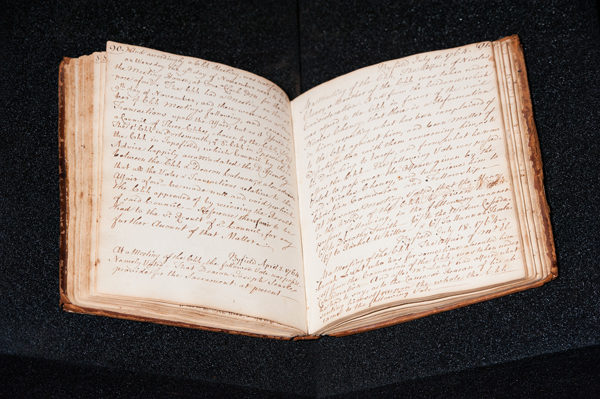 BOSTON (RNS) Six years ago, the people of First Congregational Church of Rowley in Massachusetts were convinced they’d lost their treasure. A 17th-century minister’s 664-page diary, and its rare detailed account of community life in early America, had been missing for nearly two decades.

Then the phone rang.

A local bank was cleaning out its vaults when a staffer opened a burlap sack marked “dimes” and found an old leather-bound book with strange handwriting inside.

Sure enough, it was the long-lost diary of the late Rev. Samuel Phillips, whose keen observations of conflicts and concerns in the 1600s have now been digitized to ensure they’re not lost again.

Rowley’s brush with disaster points to an all-too-common problem, historians say. Irreplaceable documents from colonial Massachusetts, where churches kept better records than in other colonies, aren’t protected online or in climate-controlled stacks.

Original copies are routinely squirreled away in Congregational church storage rooms or attics of parishioners’ homes, where fire, flood or other mishaps could steal history forever.

“These are national treasures that speak to the founding generations of America,” said James "Jeff" Cooper, an Oklahoma State University historian and director of the 2-year-old New England's Hidden Histories project. “The people of Massachusetts themselves don’t understand how important and how rare these records are.”

Preservationists are working to digitize and otherwise safeguard historical riches that rest with Massachusetts Congregationalists, whose churches were the center of community life in colonial days. But the work is progressing slowly, at a rate of about one church per month, as the cash-strapped project tries to win trust from wary church members who’ve guarded the collections for generations.  (The Colonial Society of Massachusetts has provided a $14,000 grant for transcribing the Phillips diary.)

“They’re just suspicious Yankees,” said Margaret Bendroth, executive director of Boston’s Congregational Library, which oversees the project. “You could not just knock on the door of the church and say, ‘I’d love to digitize your records.’”

Eighteenth-century records from an "Indian church" established by Congregationalists at Natick, Mass., are among those being digitized. Photo courtesy Congregational Library

Launched in 2011, New England’s Hidden Histories project has created electronic copies from 22 churches, most of which have also given originals to Boston’s Congregational Library for safekeeping. The goal is to digitize the best records from 200 to 300 Massachusetts churches before turning to other states.

The cache is precious in part because churches generally kept ministers’ notes on testimonies, but seldom saved individuals’ accounts in their own words. Together with Middleboro’s set of penned confessions of sin, the relations offer a rare window into American Puritanism as lay people experienced it.

“We have this picture of the Puritans where we know what the ministers thought, because we have their sermons,” Bendroth said. “These records are unique because they tell about ordinary people having disputes … and having a voice in their own government.”

Beyond the ins and outs of church life, the records hold keys to understanding how the first experiment with government by consent of the governed played out. Readers hear ordinary people claiming particular rights for the first time and laying foundations for the country’s democratic experiment.

The centuries-old originals are sent away to a specialist shop in Rhode Island, where the digitization process can take months.

Reassuring churchgoers to part with records, temporarily or permanently, requires personal relationships and face-to-face meetings, Cooper said. Those can be difficult since he’s in Oklahoma most of the year.

He’s proposed a three-year, $1 million budget to establish local staffing and accelerate the project, which could require millions more to complete. Finding funding for this work can be challenging, he notes, because some foundations are reluctant to sponsor church-related research, even when the goal is a nonreligious one.

Despite hurdles, the project is making progress as local church gatekeepers are persuaded to loosen their grips. When Cooper visited Old North Church in Marblehead in 2012, a team of five from the church met him, spread their documents on a table and invited him to look, but not take.

“It was an awesome sight,” said Cooper. “But they made clear that those records would never leave the church (permanently). Possibly they would let them out for digitization. That’s how difficult and how delicate this is.”

After hearing Cooper explain for an hour what Old North’s records mean for American history, church leaders agreed to have them digitized and stored at the Congregational Library in Boston.

Scholars hope the most detailed of Congregational Church records from every New England state will eventually be digitized, transcribed and made searchable online. Some local churchgoers are trying to rally peers in area congregations to participate.

“What we’re afraid of is (records) are either going to disappear or get ruined,” said David Irving, a First Congregational Church of Rowley member who’s been urging other churches to safeguard and digitize their records.

A cache of records found at Natick, where Congregationalists established an Indian church, might show how Christianity spread to Native Americans on the early frontier. The diary of Phillips, whose 45-year tenure in Rowley spanned the Salem Witch Trials era, could shed unique light on how witch hysteria swept the region in anxious times.

September 21, 2020
Related Posts
By Alejandra Molina
In Oregon, churches and anti-fascists unite to provide mutual aid to fire evacuees and others in need
By Alejandra Molina
‘Your fight is my fight’: Latino clergy and faith leaders rally behind Black Lives Matter
By Alejandra Molina
Four young people of different faiths move into a home together, then a pandemic happens
By Associated Press
Massachusetts man charged with attempted arson at Jewish nursing home
By Jeffrey Salkin
Warning: Your piety might be dangerous to your health