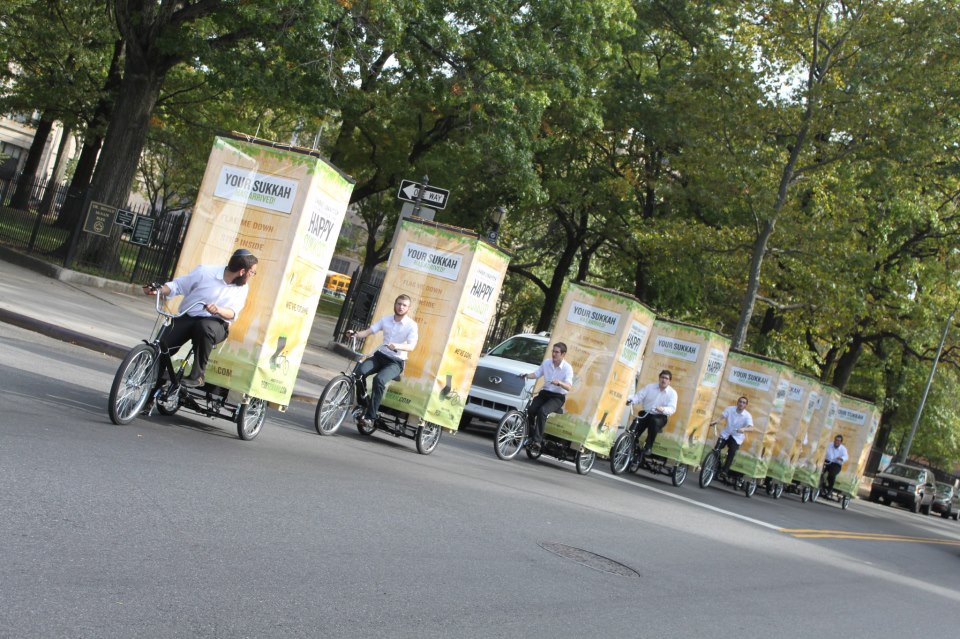 This Sukkot about 40 Pedi Sukkahs, many pedaled by Chabad rabbis, are roaming cities from Portland to Montreal to Brussels, bringing the holiday to Jews who might otherwise ignore it.
September 19, 2013
Lauren Markoe 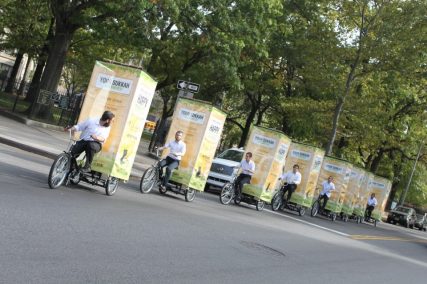 This Sukkot about 40 Pedi Sukkahs, many pedaled by Chabad rabbis, are roaming cities from Portland to Montreal to Brussels, bringing the holiday to Jews who might otherwise ignore it.

(RNS) The Jewish holiday of Sukkot – a harvest festival which some liken to a “Jewish Thanksgiving” -- requires Jews to spend time in a sukkah, a sort of temporary dwelling that evokes the Israelites' shelters during their desert wanderings.

During Sukkot, which began Wednesday evening (Sept. 18) and lasts for eight days, observant Jews are supposed to eat and even sleep in the sukkah. Typically, the wood or canvas structure holds a family or two, and is set up in the yard.

But what if you have no place to build a sukkah, or just didn’t get around to it? Maybe a “Pedi Sukkah” will roll into your neighborhood.

The Pedi Sukkah is basically a small sukkah on wheels, most often an adult-sized tricycle with a platform that can support a sukkah big enough for one burly person.

Orthodox Jewish men on "Pedi-Sukkahs" in New York. A sukkah is a temporary structure — reminiscent of those the Israelites dwelt in as they wandered 40 years in the desert – that Jews are required to build for the festival of Sukkot, which began on Wednesday evening (Sept. 18) and will last for eight days. Chabad–Lubavitch, a group of devoutly religious Jews, put sukkahs on bikes to bring them to Jews who might not otherwise have a chance to spend time in one.

The idea for it came to a Brooklyn teenager named Levi Duchman in 2009, when he built the prototype. Duchman, who is part of the devout Chabad-Lubavitch movement, soon after teamed up with Worksman Cycles, a New York company that makes industrial bikes, according to Chabad.org.

This Sukkot about 40 Pedi Sukkahs, many pedaled by Chabad rabbis, are roaming cities from Portland to Montreal to Brussels, bringing the holiday to Jews who might otherwise ignore it.