POLAND, Ohio (RNS) A straggle of kids came up for children’s time at Poland Presbyterian Church, a 211-year-old congregation established on Lot One, in Township One, in Range One of what was once known as the Connecticut Western Reserve.

The church’s education minister asked them to do this year’s CROP Walk in nearby Youngstown. Two miles, five miles, whatever they can do to raise money for alleviating hunger.

“Seventeen million children will go to bed hungry in America tonight,” she explained.

With that brief exchange, she enabled worshippers to do what the destructive elements in Congress and the rich people bankrolling them seem unable to do: see “Lazarus” at the gate.

Lazarus was the poor man of Jesus’ parable who starved outside the rich man’s home. The pastor in Poland wasn’t just talking about the idea of Lazarus, but actual people who, like Lazarus, are suffering gross inequities that rival the self-destructive chasms of the late Roman Empire.

With the majority of Americans now on what economist Robert Reich calls a “downward escalator,” the wealthy few are building bigger barns, and the many are scared and furious, looking for someone to blame.

Across a landscape torn asunder by partisan disdain, distrust and disinformation, faith communities are stepping up. Reaching across their own political divisions, congregations like Poland Presbyterian Church are taking action.

Congregations aren’t just making token responses, but are mustering “boots on the ground” action like collecting food to alleviate the looming loss of federal food stamps; providing shelter for immigrants; and opening up rooms for outsiders to use as offices, bed-space and recovery ministries.

When I suggested to one church group that it collect food by the carload and store it in the back pews as a visible sign of “Lazarus,” the members immediately began picturing how that could work. 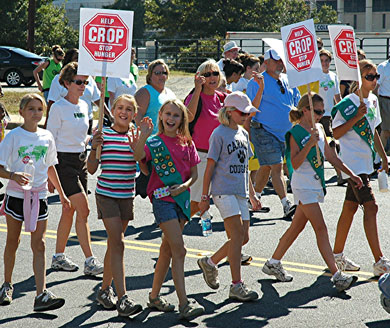 After I briefed Poland Presbyterian Church members about a new strategic planning project, a longtime educator urged the planning team to look outside and to see hunger and deprivation among children in an area whose main employer, the steelmaker Youngstown Sheet & Tube Co., closed 36 years ago.

If any enterprise in America is positioned to do the good that a paralyzed political class won’t do, it is faith communities. Yes, Christians are divided politically, doctrinally and culturally. But as Pope Francis bravely and humbly reminded his own church, being right doesn’t outweigh caring for people.

We know this from our generous responses to disasters. When terrorists hit, or floods rise, or hurricanes and tornadoes destroy, the faithful are among the first to respond and the last to leave.

The disasters sweeping simultaneously across our nation aren’t as sharply focused as a terrorist attack. But they are hurting even more people: joblessness at all levels and ages, reckless greed among the mega-wealthy, deteriorating health care, inadequate food and shelter, crumbling public education and corroding infrastructure. They’re all hitting at once, and our federal government is paralyzed by ideologues.

Churches know about being paralyzed by ideologues, too, but we seem to be getting over that. In what I find a hopeful development, more and more church leaders are saying it’s time to act outside their walls — and to act boldly, without counting the cost.

Destructive elements in Congress might yet succeed in shutting down the government. But they won’t cripple this emerging fervor among the faithful to bind up the nation’s wounds.

News
In Oregon, churches and anti-fascists unite to provide mutual aid to fire evacuees and others in need
Beliefs
Four young people of different faiths move into a home together, then a pandemic happens
Opinion
Warning: Your piety might be dangerous to your health
News
‘Border Church’ and ‘Border Mosque’ team up for prayer service
News
Christians urge California governor to veto bill for abortion pill access at colleges
© Copyright 2020, Religion News Service. All rights reserved. Use of and/or registration on any portion of this site constitutes acceptance of our User Agreement and Privacy Policy, Privacy Statement and Cookie Notice. The material on this site may not be reproduced, distributed, transmitted, cached or otherwise used, except with the prior written permission of Religion News Service.