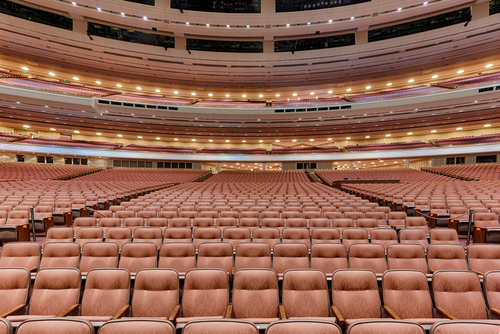 Next weekend, the LDS Conference Center will host its semiannual General Conference in this auditorium. Some women are petitioning to attend the all-male priesthood session on October 5.
September 25, 2013
Jana Riess 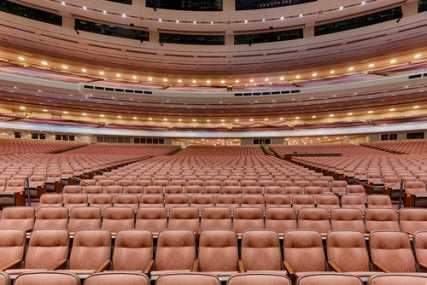 Next weekend, the LDS Conference Center will host its semiannual General Conference in this auditorium. Some women are petitioning to attend the all-male priesthood session on October 5.

Yesterday the Deseret News ran an interesting story on the LDS Church's response to some Mormon feminists' plan to gently petition for access to the October 5 priesthood session of General Conference, which throughout Mormon history has been open only to men. The article features a respectful and generally positive interview with Ordain Women founder Kate Kelly, emphasizing that she is an active member of the Church and a returned missionary. It contains a number of strong quotations from Kelly, who comes across as a thoughtful advocate, both passionate and compassionate:

“I respect and value the church and myself too much to be silent on this question. I truly believe that God wants us all to equally share the burdens and blessings of the priesthood. The ordination of women would put us all on equal spiritual footing with our brethren, and nothing less will suffice.”

But the article also emphasizes the hundreds of thousands of Mormon women who will watch women's conference this weekend versus the possibly two hundred or so who will attempt to attend the men's session the following Saturday. This has the effect of positioning the Ordain Women movement as an easily dismissed lunatic fringe, a tiny minority in a sea of otherwise satisfied women. This is echoed later in the story when my blog is quoted about sociological research that suggests that nine out of ten Mormon women say they do not wish to hold the priesthood.

There has been some rumbling online among Mormon women who are upset that the media would pay attention to those who believe that women should hold the priesthood. I am aware that the Ordain Women leaders have received some notes from women (and men) who have accused them of misrepresenting the faith. They fear that outsiders might assume that such views are normative for a majority of LDS women.

It's not actually my job as a blogger to "represent" anyone's views, or to be a spokesperson of any kind for the Church. I don't speak for Mormon women; even some of my feminist Mormon friends don't agree with me about ordination. And that is fine; I feel no burden to make other people accept my views, only to express what is on my own conscience.

And my conscience has told me for many years that Mormon women should have the priesthood, and someday will. Twenty years ago yesterday, I went down into the waters of baptism. I did so with some important questions still unanswered, including why women were not permitted to make (or even be consulted about) significant administrative decisions or to exercise ecclesiastical authority in my chosen faith. Those restrictions did not deter me from going where God had called me to go, but they caused me to pray long and hard about my baptism beforehand. One of the reasons I am a Mormon today is that I had a personal revelation that women will someday hold the priesthood.

That revelation came with an impression that women's ordination would not occur during my lifetime. But even if that is true, it will not prevent me from making my feelings known on the subject, or from reminding the people I know of how much more healthy organizations are when men and women share the load equally. Part of the burden of theological agency is that we are called to always and ever contribute to a more just and equitable world, no matter how distant that world may seem. For me, justice happens when women are not simply told that they are special/wonderful/incredible/beautiful, but when they are entrusted with equal responsibility.

Other people's agency will lead them in different directions. I respectfully disagree with Sister Burton's assessment that what Mormon women really want are the "blessings" of the priesthood. "I think they are after the blessings," she is quoted as saying. "And they are happy that they can access the blessings and power of the priesthood.” I feel that this approach ignores a basic truth of spiritual formation: the blessing is in the exercising. The real growth occurs from participating in spiritual work itself, in following the demands of God's service. Sometimes that happens when we as individual children of God are the recipients of blessings. As I've discussed before on this blog, I have been privileged to receive priesthood blessings that have brought me great comfort and strength in dark times, for which I am grateful. Other growth happens when we are the instruments of blessing, not merely its recipients.

I don't think that anyone is expecting radical or sudden change from the Church. I for one am surprised and heartened that it has opened up the priesthood session to the general public online, the first time the priesthood meeting has been open to women in any form.

I will continue loving and serving my Church in the ways that I can, without the priesthood, as part of the ten percent of Mormon women who are cheering for women's ordination -- a percentage that will grow over time. But I will also continue pointing out that the ordination of women is a glorious part of Mormonism's future.