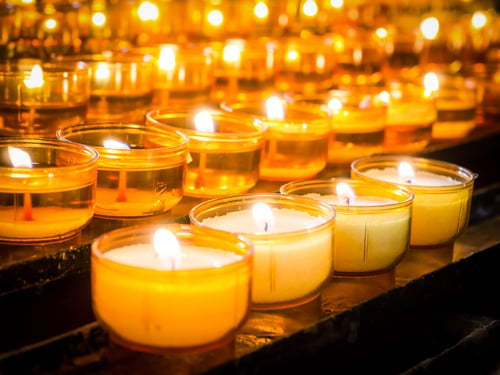 In January, right after my mother’s death, I felt the comfort of an attentive God.

I wasn’t just heartsick at that time; I was also sick sick. The day of the funeral, I noticed that I was feeling more tired than I could remember feeling in years, and just put it down to grief and the exhaustion of weeks of caregiving. The evening after that, though, I was leveled by that lousy flu that felled thousands of people throughout January. My fever spiked to 102 and was in the triple digits for nearly five days.

I don’t remember much about that terrible week, but here is one thing I’ll never forget: two nights after the funeral, God answered my prayer.

I had spent most of that day in bed, trying to read but mostly sleeping or simply lying there, missing Mom. My husband took wonderful care of me while also trying to pack our things for the departure the next day—my first time home in over five weeks. I was too ill even to pack my own suitcase.

In the evening I slowly shuffled downstairs to watch a movie. I was just getting settled when the doorbell rang. My husband answered it, and I heard male voices at the threshold.

“It’s the missionaries,” he said.

“Oh! Well, ask them to come in,” I responded. Two young (and very cold) men came in the front room, and I asked them how they had known where to find me. I figured that someone from my home ward in Cincinnati must have asked the congregation in Illinois to check in on me, or something. But they just stared at me blankly, and replied that they had been tracting on our street.

They hadn’t known I would be there. They hadn’t known that just that morning, feeling ill and desperately sad, I had been thinking how much I wanted to get a priesthood blessing, but I didn’t know any Mormons in town I could ask.

I had already felt deep love from the wonderful people at my mother’s Lutheran church, and was grateful for that. But there was also a part of me that wanted a connection with my own people, some Latter-day touchstones in my time of deep sadness.

And they came. They came without my even having to ask.

It’s a simple story, this tiny miracle. Skeptics will look at these facts—that the city’s only Mormon missionaries happened to be tracting on that particular street on that particular night, my last night in town, when I had great need of a priesthood blessing—and see a string of plausible coincidences. And it’s certainly possible that they’re right, that this was all just a fortuitous accident. It’s not like I have a slew of miracle stories I can trot out from more than a quarter century of being a Christian, Latter-day or otherwise.

I don’t believe the skeptics, however. I know what I felt. After the elders placed their hands on my head and given me a blessing for healing and comfort, I experienced peace and a sense of quiet wonderment: God hears me. God knows me.

And when I needed it most, God sent other people to minister to me.