Religion News Service (RNS) is an independent, nonprofit and award-winning source of global news on religion, spirituality, culture and ethics, reported by a staff of professional journalists. Founded in 1934, RNS seeks to inform readers with objective reporting and insightful commentary, and is relied upon by secular and faith-based news organizations in a number of countries.

RNS is a subsidiary of Religion News Foundation and a proud member of Institute for Nonprofit News.

RNS aims to be the largest single source of news about religion, spirituality and ideas. We strive to inform, illuminate and inspire public discourse on matters relating to belief and convictions.

For more than 80 years, RNS has been an authoritative source of news about religion, spirituality and ideas. With a team of correspondents around the world, RNS provides news on religion and its intersections with political and cultural issues. Our stories are distributed to the nation’s leading newspapers, news magazines, online media outlets, broadcasting firms and religious publications.

The Religious News Service, its original name, was founded by journalist Louis Minsky (1909-1957) as an independent, nonprofit affiliate of the National Conference of Christians and Jews. From the start, it was dedicated to providing fair, balanced, nonsectarian news about religion to the secular and religious press.

In 1983, RNS was acquired by the Dallas-based United Methodist Reporter and continued to operate as an independent news agency. In 1994, Newhouse News Service, a major publisher of daily newspapers and magazines, purchased it and changed its name to Religion News Service.

Our staff page can be found here.

Our organization retains full authority over editorial content to protect the best journalistic and business interests of our organization. We maintain a firewall between news coverage decisions and sources of all revenue. Acceptance of financial support does not constitute implied or actual endorsement of donors or their products, services or opinions.

We accept gifts, grants and sponsorships from individuals and organizations for the general support of our activities, but our news judgments are made independently and not on the basis of donor support.

RNS is the wholly-owned subsidiary of RNF. RNF is an independent educational and secular nonprofit organization founded in 1999.

RNF’s mission is to strengthen and improve the understanding of religion, improve public discourse about religion, advance religious literacy, and support religion journalism. In this, the Foundation works to provide comprehensive coverage of religion, religious freedom, and religious persecution across the globe.

Thanks to a grant from Lilly Endowment Inc., RNS, the Associated Press (AP) and The Conversation are involved in a multi-year global religion reporting initative, in an effort to expand religion news reporting in the U.S. and around the world.

This initiative aims to provide balanced, nuanced coverage of major world religions, with an emphasis on explaining religious practices and principles behind current events and cultural movements.

Staffed by journalists from RNS and the AP and editors from The Conversation -- an independent, nonprofit publisher of commentary and analysis sourced from academic experts -- the desk produces multiformat religion journalism intended to improve general understanding and analyze the significance of developments in the world of faith. 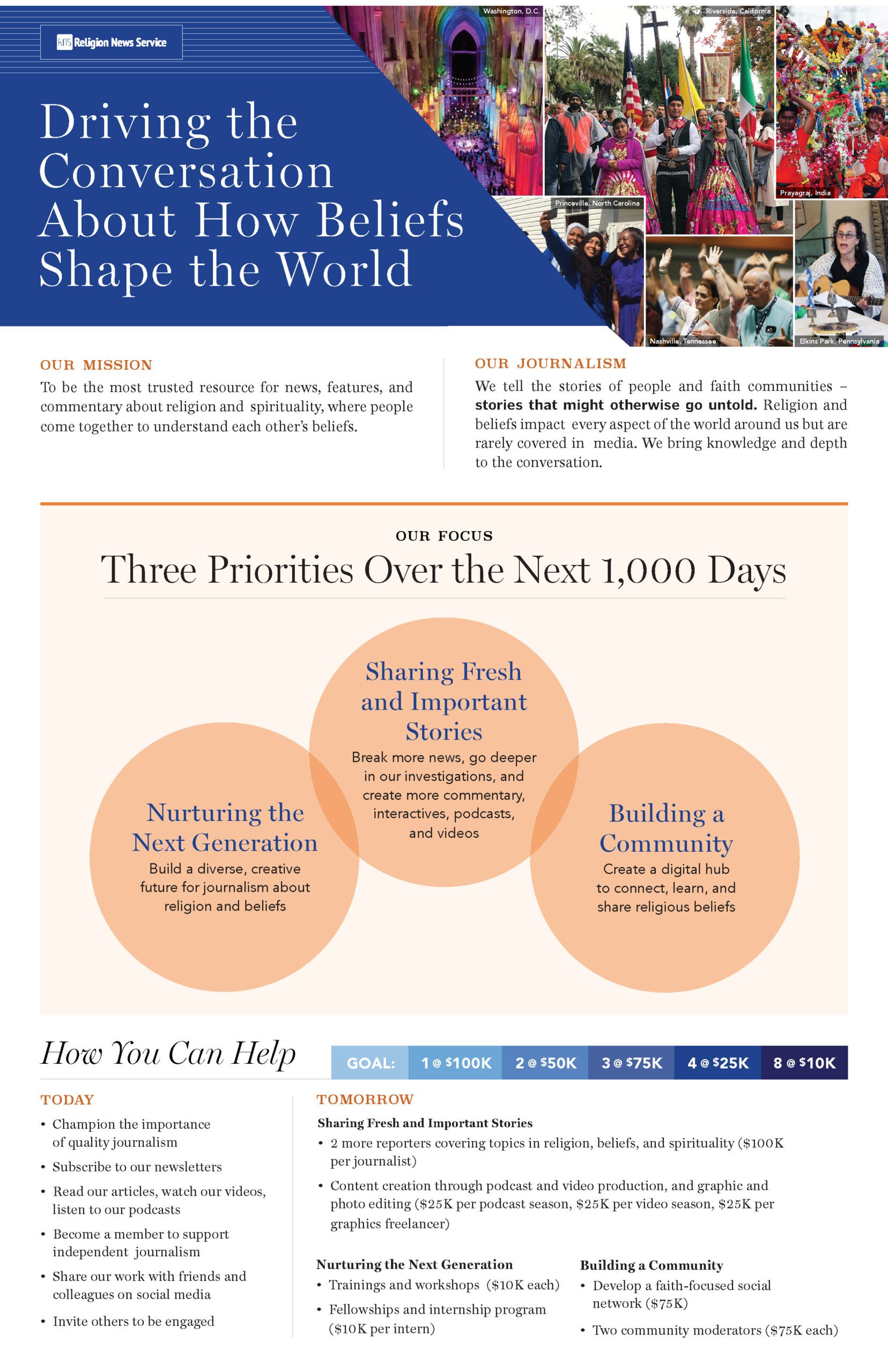 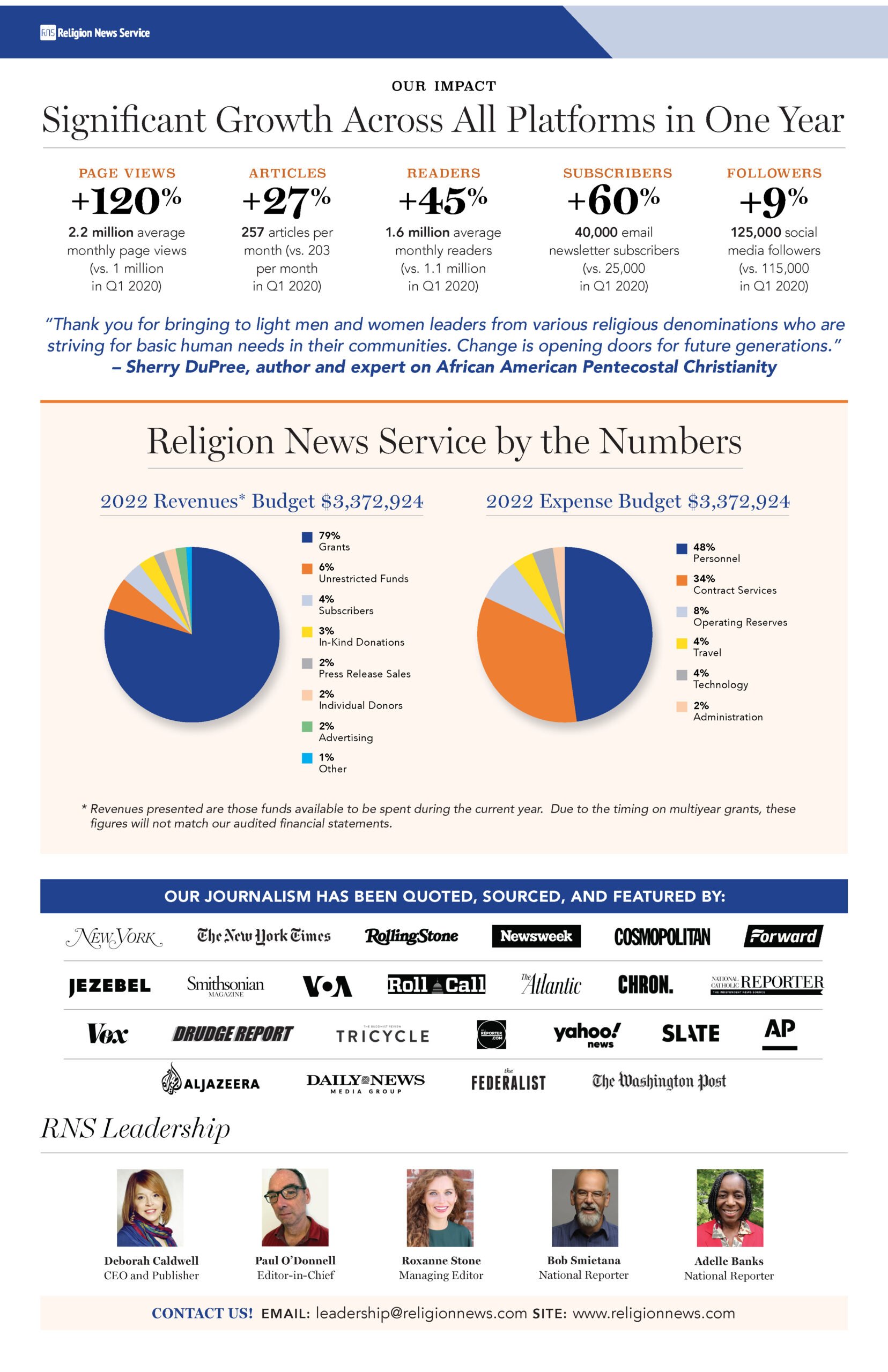