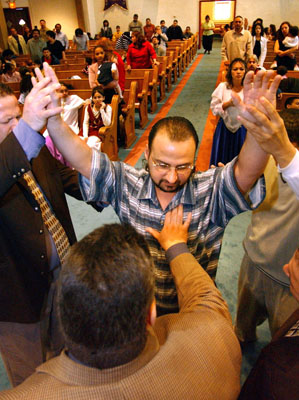 But a Public Religion Research Institute survey released Friday (Sept. 27) at the Religion Newswriters Association conference finds that their religious profile is shifting:

The 2013 Hispanic Values Survey of 1,563 Hispanic adults was conducted online in both English and Spanish between Aug. 23 and Sept. 3. It has a margin of error of plus or minus 3.7 percentage points.

The survey found that most Hispanics are delighted with Argentine-born Pope Francis, but they hold slightly less favorable views of the Catholic Church. While nearly 69 percent look favorably on the pope, only 54 percent see the institution in a favorable light.

Hot buttons issues with conservative Christians —  abortion and same-sex marriage — are not as critical to Hispanics. Topping their list of critical issues are jobs and unemployment (72 percent), followed by health care costs (65 percent) and the quality of public schools (55 percent).

While a majority (52 percent) of Hispanics say “abortion should be illegal in all or most cases,” it is cited as a critical concern by only 32 percent.

Only 22 percent cited same-sex marriage as a critical concern. Most Hispanics (55 percent) favor allowing gay and lesbian Americans to marry.

The survey found “bipartisan and cross-religious support for immigration reform among Hispanics.” Even so, the American dream seems out of reach to many: