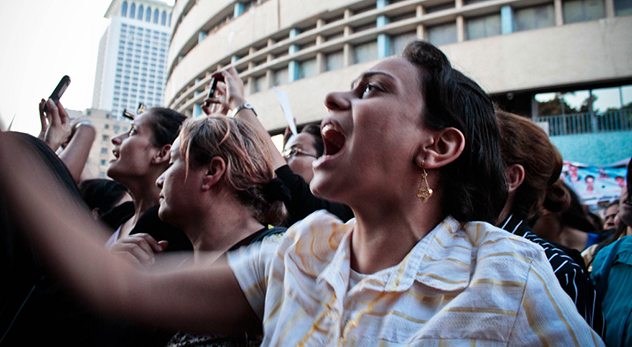 Woman joins a demonstration by Egyptian Copts in protest of the demolition of a church and attacks on Christians – Photo credit: Maggie Osama (http://bit.ly/1725Ce2)

“Christians in the Middle East and Africa are being slaughtered, tortured, raped, kidnapped, beheaded, and forced to flee the birthplace of Christianity,” she wrote. “One would think the horror might be consuming the pulpits and pews of American churches. Not so. The silence has been nearly deafening.”

Powers deftly exposes the what—American Christians’ failure to advocate for their brothers and sisters around the world—but her column begs the question of why. Namely, why aren’t Western Jesus-followers more aware or engaged on this issue. As I see it, there are at least three reasons:

I am not one who believes there is a concerted, cryptic liberal bias in the media. Firstly, I nurture no illusions that there is such a thing as “unbiased news”. (A person cannot be completely divorced from their experiences or worldview, so the goal in journalism is not to eliminate bias but rather to minimize it.) And secondly, I have come to know too many journalists, columnists and reporters at too many outlets who are genuine in their attempt to deliver an accurate picture of reality to their readers. “Bias” is often what we call a message that doesn’t square with our imaginations of the way the world is or should be.

And yet, I do think Christian persecution is under-reported by the media in general. Paul Marshall of the Hudson Institute says that persecution, if you include discrimination, is affecting approximately 600 to 700 million Christians globally. According to a 2011 Pew Forum study, Christianity is the most persecuted religion in the world with followers of the faith being actively harassed in 130 countries.

If a population of half a billion people are so blatantly oppressed, it’s difficult to understand why it isn’t making much news? The answer, in my opinion, is the location where much of the persecution occurs: the Middle East. Many journalists I speak with seem timid to delve too deeply into the topic or to report on it too often for fear of being perceived as Islamaphobes or outright racists.

I agree with The Atlantic’s Jeffrey Goldberg, who remarked in USA Today that the persecution of Christians in the Middle East is “one of the most undercovered stories in international news.” People can’t advocate for issues they aren’t aware of and, to borrow from the Apostle Paul in Romans 10:14, “how will they hear if no one tells them.”

A 2010 LifeWay Research survey reported that 79% of churches said the flailing economy had negatively impacted their congregation. I’ve worked for and with numerous churches during this recession, and my experience is that the tendency during these periods is to go brainstorm ways to protect the institution. In order to tighten their belts, churches will trim international missions and ministry budgets to avoid personnel and salary reductions. During recessions, churches often turn inward, not outward.

When this happens, congregations disconnect from international communities where they previously maintained partnerships and subsequently grow less aware of the problems facing the global church. It’s not that they don’t care, but rather that they don’t know or perhaps they do know but are so focused on “more important” initiatives that they can’t muster the energy to address them.

American Christians are engaged on some political issues. The powerful conservative faction, for example, are focused almost exclusively on abortion, gay marriage, and religious liberty. The last issue refers to the belief held by some that American Christians are under attack. Some are so worried about the drummed up pseudo-persecution of the American church that they are ignoring the actual persecution of the global church, particularly in the Middle East.

My April 3rd column for “On Faith & Culture” addressed this at length:

Claims about American persecution of Christians are a form of low comedy in a country where two-thirds of citizens claim to be Christians, where financial gifts to Christian churches are tax deductible, where Christian pastors can opt out of social security, and where no one is restricted from worshipping however, whenever, and wherever they wish.

…Why isn’t the mammoth Christian community of the world’s most influential nation in a tizzy over the persecution of Christians in the Middle East and around the world?

The answer, it seems, is that many of their attentions have been focused elsewhere. Some are too busy protesting Target employees who wish them “Happy Holidays” and others have been mobilizing to boycott JCPenney over selecting Ellen DeGeneres, an outspoken lesbian, to be their spokesperson. Isn’t it time that American Christians reinvest their energies in addressing the actual persecution of their brothers and sisters happening outside their borders?

While our gazes are set elsewhere, people are being tortured, displaced, and killed. American churches need to wake up to the suffering of their global brothers and sisters. We must commit to pray and advocate for the millions of Christians under attack around the world. In the face of such oppression, silence is not an option.