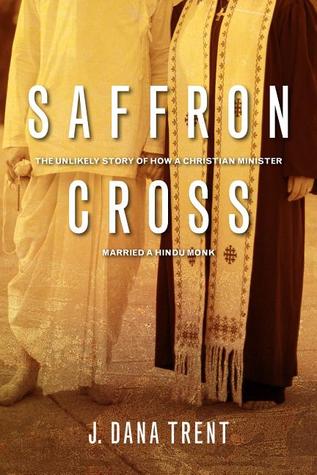 The love story of a Southern Baptist minister and a Hindu monk.

If you know someone in an interfaith marriage -- or if you simply enjoy an unlikely love story -- I have a book to recommend: Dana Trent's memoir Saffron Cross: The Unlikely Story of How a Christian Minister Married a Hindu Monk, which was released yesterday. I read the galley this summer and got a chance on my travels to interview the author and her husband, the titular Hindu monk. They are charming. Here's a taste of our conversation. -- JKR

Earlier this year I read Naomi Schafer Riley’s book Till Faith Do Us Part, which claims that 36% of American marriages are now interfaith. And like you, many of those people get married later in life; the statistics of interfaith marriage are even higher for people who marry in their 30s and beyond. Her theory about this is that as we get older, we feel we can’t be too picky. Is that why, when you made out your eHarmony profile online in your late 20s, you didn’t specify that any guys you dated needed to be Christian? 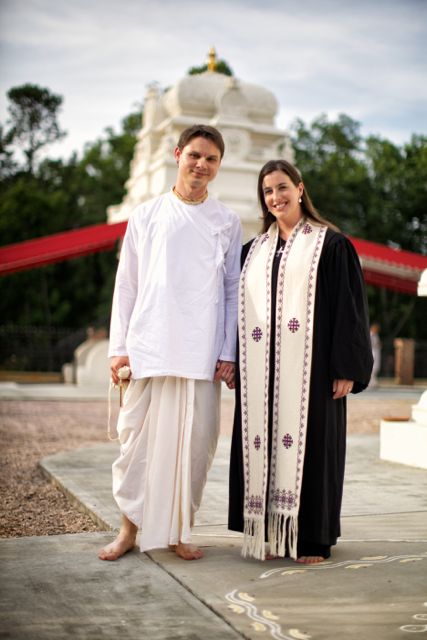 Dana: I made a conscious decision. I was 27 at the time, and the pool of daters was quickly shrinking. And the first time I joined eHarmony a few years before, I had answered the questions the way I felt a Baptist minister should answer. And the pool of men was very conservative and did not match my values. So the second round I realized that since I had become a Christian who was open-minded, I should be open to meeting other people.

Fred: In general, at that age [29], it’s hard to meet people that share your same values. Most people meet people in bars, which is not great if you’re interested in a relationship with some kind of shared faith. What caused me to be open to folks of faith was not so much to have the exact same faith, but the same depth of faith. I wanted someone who wanted to explore faith in modern life, and who wanted to go deeper in her faith. Beyond that, I was pretty open.

Dana: In fact, Fred’s profile said “spiritual but not religious.” I think he did that to be even more open, and maybe not to scare folks away. 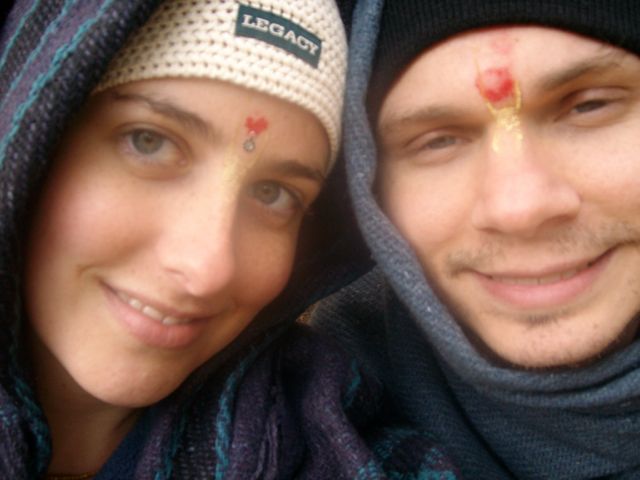 Both you and Fred are a bit anomalous in your respective religious traditions, you because you are an ordained minister in the Southern Baptist tradition, which is highly unusual for a woman, and Fred because he is a Caucasian-American convert to Hinduism. Do you think being slightly outside the mainstream of your own religious communities made you more receptive to one another?

Fred: That’s a very interesting question. I think it has; being a Hindu in America – in Western Culture in general – is kind of a difficult and awkward place to be in. Hinduism is very much influenced by Eastern life in general, and not many folks in America really share that view of life. I think that for me to make a transition from monastic life, which I was involved in for five years, it was important for me to have a relationship with someone who was a little more Western than I tend to be. As Dana describes in the book, I still have very strong monastic tendencies, and I need that balance in my life.

Dana: One of the most positive changes for me was that being married to a Hindu has actually enriched my Christian tradition. Faith and life are so integrated in Hinduism, and being married to Fred has forced me to do that more. One of the main ways has been vegetarianism. One of the main misconceptions about interfaith marriage has been that people will lose their own faith. I’ve found that the opposite is actually true. Being with Fred has made me ask more questions about my faith and it has deepened my spiritual journey. Vegetarianism is something that I do all day, every day, so it's made me more mindful both of food and consumption in general.

Fred: Dana has had a really significant impact on my life, especially my prayer life. I once told Dana that Hindus don’t pray, which isn’t quite accurate, but the prayers and mantras are not spontaneous. Western culture has influenced Christianity in such a way that Christians tend to ask for things and talk to God about their life. But as a monk, that was something that was discouraged. But Dana helped me to gradually overcome that. It’s OK to ask God for things, and we can do it with a certain kind of motivation. If there’s something about my job that’s bothering me and it makes it more difficult for me to focus on my mantra, it’s OK to ask for God’s help with that. Dana has really softened me, especially in regards to prayer.

Dana: We’re also much more in tune with each other now in terms of extemporaneous prayer—before bed, at meals, and other times. And that’s been a huge change in the past three years of marriage.

Fred: I asked my guru about it, actually, and he said that whether you’re full of desire or you have no desire, you should pray to God.

Tell me about your decision to have your honeymoon at an ashram in India. How did that establish the footing, or set the tone, for the rest of your marriage?

Dana: It absolutely did. It was a signal to ourselves and to our families that we were fully committed to this interfaith marriage. We had a Christian wedding in a Baptist church, and then an Indian honeymoon at an ashram. It awakened me to how much Hindus integrate faith and life. Here, we have a very clear line of separation of religion and public life. In India, religion is absolutely everywhere. It requires great integration of faith and life, which was an example for me.

Fred: She’s the kind of person who is a clean freak, so I knew India would be a challenge for her.

The toilet paper scene in the book was quite instructive.

Fred: But as difficult as India can be, it is also so beautiful. I had a lot of confidence that that beauty would also affect Dana. And it did. I was really proud of her.

Dana: In India, for the first time I realized that my conception of God, and the feeling that I get when I think of God, was the very same feeling I saw in the people of India. There is one God, and many forms and shapes and sizes and manifestations, but it was that same Holy Spirit stirring that I had felt in a Protestant church in the United States.

Dana: We haven’t made a decision yet, and since we aren’t parents we can’t speak to what it’s like to be parents who are navigating this. But we do love what we see coming out of many interfaith families. Susan Katz Miller’s Being Both is a book we love – it’s about raising children in both religions. They’ve immersed their children in both religions. If we had children, we would want to do the same thing. Logistically, that’s hard, but our motto is that we always worship together, no matter what.

Fred: But it would be hard. We have a lot of friends with kids, and we’ve learned a lot from them about how they raise their kids and interact with them.

Dana: I’m sure the key is just to keep the lines of communication open. That’s one of the things that Riley mentions -- that so many people just don’t talk about what will happen when they have children.

Why did you want to write this book? Who do you hope will read it?

Dana: I found that I was getting so much joy from this relationship and that my faith journey was growing exponentially month by month. I thought other folks might benefit from it. I think the message of Saffron Cross is that when you take the time to learn people’s faith story, you’re surprised by how universal those experiences are. The second reason is that when we first got engaged, we looked for books on Christian-Hindu marriages and didn’t find any. Hopefully folks who get engaged or are dating might look at this and find it helpful.

Fred: And there are a lot of commonalities. When I read biblical scripture I see devotion, and that’s the path of Hinduism that I am on too. So there’s so much commonality there.

Dana: We want people to realize that it’s not so much about the same faith as having deep faith.