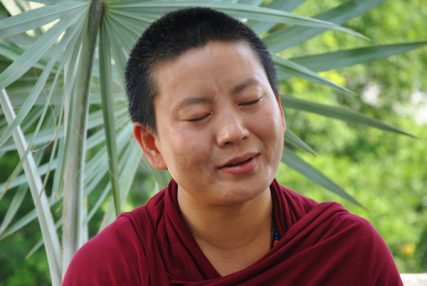 This year she was invited by Academy Award-winning Indian composer A.R. Rahman to sing “Zariya,” one of his compositions.

And at a recent San Francisco concert, American singer Bonnie Raitt told her she was one of her greatest fans.

For Ani Choying Drolma, nicknamed the “rock star nun,” singing and performing with top musicians is a way to take the essence of Buddha’s teachings to the world and help people in need.

“The Buddha said you have to be skillful according to the time, place and people,” said the practical 43-year-old nun.

In the past 16 years, Drolma has recorded 10 albums of sacred chants and devotional songs.

“Not only is she an amazing artist, but also an incredible human being,” said Farah Siraj, a Jordanian singer who collaborated with Drolma on “Zariya.”

Drolma sings and records from her base at the Nagi Gompa nunnery near Nepal’s capital city of Kathmandu.

“Music has always been an integral part of Buddhist religious practice, especially as meditation,” she said. “My music is only different in style and framework.”

Drolma said she is not motivated by awards or concerts. She wants to “make everyone get the meaning of Buddha’s teachings and spread the word of wisdom.”

Through her Nun’s Welfare Foundation, she works to raise money for the education of child nuns. Two years ago, another initiative, the Arogya Foundation, set up Nepal’s first laboratory for renal diagnostic tests.

Drolma joined the nunnery at age 13 to escape the beatings of an alcoholic father. Under the tutelage of her teacher and meditation master, Tulku Urgyen Rinpoche, she was initiated into the spiritual world of Buddhism. Her singing talent was honed through learning and practice.

“I admire Ani Choying’s singing, and can feel her music in my heart,” said Lhamo Dukpa, one of Bhutan’s most popular singers, who is releasing her fifth album this year.

She shrugs off criticism that she is not conforming to tradition.

“Criticism is very natural,” she said. “The world always finds a way to praise you and a way to blame you. This is how it is, how it has been and how it always will be.”