(RNS) Could a woman vote for the next pope? 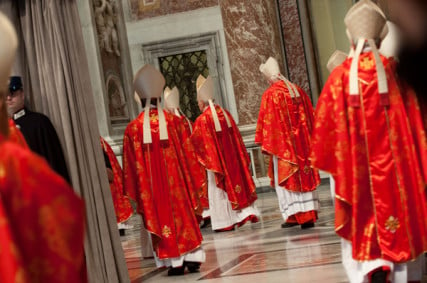 Pope Francis has said repeatedly that he wants to see greater roles for women in the Catholic Church, and some argue that he could take a giant step in that direction by appointing women to the College of Cardinals – the select and (so far) all-male club of “Princes of the Church” that casts secret ballots in a conclave to elect a new pope.

Whether it’s even possible is a matter of debate. But that hasn’t stopped the feverish speculation, which was sparked last month by an article in a Spanish newspaper in which Juan Arias, a former priest who writes from Brazil, wrote that the idea “is not a joke. It’s something that Pope Francis has thought about before: naming a woman cardinal.”

Arias quoted an unnamed priest — a Jesuit, like Francis – who said: “Knowing this pope, he wouldn’t hesitate before appointing a woman cardinal. … And he would indeed enjoy being the first pope to allow women to participate in the selection of a new pontiff.”

That was enough to start the ball rolling. The report was quickly picked up by Catholic media in Italy and then raced around a church that, in the months since Francis’ election, has been primed to expect the unexpected from this pope.

In the U.S., the Rev. James Keenan, a fellow Jesuit and a well-regarded moral theologian at Boston College, started a post on his Facebook page soliciting nominees for the first female cardinal. Keenan said he wrote the post mainly as a way to recognize the many women who would be “great candidates.” On his list: Linda Hogan, a professor of ecumenics at Trinity College Dublin; Sister Teresa Okure, a theology professor at the Catholic Institute of West Africa in Nigeria; and Maryanne Loughry, associate director of the Jesuit Refugee Service in Australia.

But Keenan is not the first to float the idea.

Just last year, New York Cardinal Timothy Dolan, president of the U.S. Conference of Catholic Bishops, was asked during an interview on Catholic television whether a woman could be named a cardinal. Dolan agreed that it was “theoretically” possible, adding:

“You know, in fact, get this, and I’ve heard it from more than one person, that one time somebody said to Blessed John Paul II, ‘You should make Mother Teresa of Calcutta a cardinal.’ … And the pope said, ‘I asked her. She doesn’t want to be one.’”

So what’s to stop Francis from taking that step – assuming he finds a woman willing to say yes?

It could be a tricky move, but there’s a saying in the church that while only God can create the world, only a pope can create cardinals. The role of the cardinal is not a biblical precept and is a relatively late development in Catholicism – the office in its familiar form was codified in the 12th century, when cardinals were given the exclusive right to elect a pope. The pope in turn can largely can set whatever parameters he likes for who becomes one of the 120 or so voting-age cardinals in the college.

Beyond that, there isn’t much more to the office; it is basically a title, an honor, albeit a grand one, and requires no special ordination. “The cardinalate is a very historical, human institution that can be changed more easily than other things,” said Massimo Faggioli, a church historian at the University of St. Thomas in St. Paul, Minn. 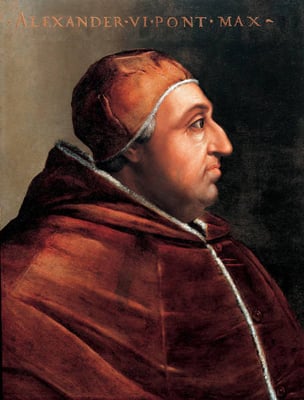 (RNS1-MAR31) Pope Alexander VI (1431-1503) was one of history’s most infamous pontiffs and serves as the inspiration of the new Showtime series “The Borgias.” RNS photo.

In past centuries the office was often used as a patronage job; during the Italian Renaissance, Pope Alexander VI made his illegitimate son, Cesare Borgia, a cardinal at the age of 18. Such nepotism led to a reform of the office, but laymen – never women – were occasionally made cardinals in the ensuing centuries, though they were eventually ordained as deacons.

The last cardinal who was not a priest was an Italian jurist, Teodolfo Mertel, who wrote laws governing the papal territories. Pope Pius IX made him a cardinal in 1858 and Mertel died in 1899.

In 1917, a revision of the church’s Code of Canon Law decreed that only priests and bishops could be made cardinals, and a subsequent update in 1983 said that anyone made a cardinal must become a bishop as well.

Yet popes have periodically dispensed with that requirement and have named priests as cardinals without making them bishops. In 1968, Pope Paul VI reportedly offered a red hat to the French Catholic philosopher Jacques Maritain, a layman. Maritain declined.

But the idea of making a woman a cardinal continued to percolate. The late Cardinal Carlo Maria Martini, also a Jesuit whose progressive legacy has been praised by Pope Francis, proposed the idea years ago, as have several other church leaders and commentators.

The main obstacle now appears to be the requirement that a cardinal must be ordained. Yet that could be resolved by allowing women to be deacons – a level of ordination just below the priesthood. The idea of opening the diaconate to women has been gaining currency in recent years and has emerged as a possible path to the conclave for lay people, and specifically for woman.

Would Francis do it? He has said, among other things, that the church needs to develop “a truly deep theology of women” and that it “is necessary to broaden the opportunities for a stronger presence of women in the church.”

Appointing women as cardinals might be one way to do that — or the debate could provide cover for other, more realistic but equally momentous changes, such as naming a woman to head a major Vatican department or opening the diaconate to women.

In the end, as one Italian news story put it: “The pope is the supreme legislator of the universal church and is absolutely free to make decisions about canon law.”