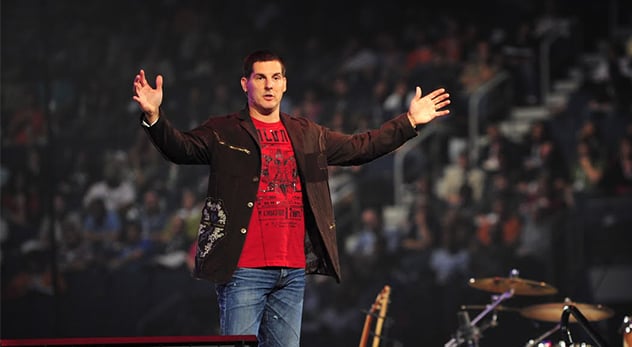 Craig Groeschel, pastor one of the largest churches in the U.S., says men should “man up.” (Image courtesy of Lifechurch.tv)

The founder and senior pastor of one of the largest churches in the United States—with 15 locations in five states—is inviting men to fight. Craig Groeschel’s, in his new book, Fight: Winning the Battles That Matter Most, challenges readers to “man up.” He says that God gave men “a warrior’s heart” and they need to learn to fight the right battles “for God’s sake.” Here, we talk about which battles he thinks men should fight and if he agrees with pastor John Piper that God gave Christianity “a masculine feel.”

JM: When you look at the portrayals of men in Hollywood and pop culture, we are inundated with these images of tough-skinned, violent, “manly men.” What are you seeing that is causing you to be concerned that men in America are becoming too passive?

CG: I think we see extremes portrayed in media. There is everything from the tough guy that just goes out and does everything wrong because he wants to, and then there is also a real passive portrayal of men who are unfaithful to their wives and are not involved in the lives of their children. I think both extremes are extraordinarily dangerous.

In society, I think one of the biggest problems we see is that men now–maybe because of the role models or maybe because of a number of factors–walk away rather than stay in when things get difficult. We see this in our churches whenever a marriage gets tough. Rather than staying and fighting for the marriage, it just seems like people give up rather than helping their children do the right thing and being involved in their lives. They say, “Well, I’ll let my wife handle that part.” So men may be fighting battles, but they are fighting the wrong battles. They are fighting for themselves and fighting for things that don’t matter. I look at the fight and really help to try to inspire men to try to reengage in the right battles and fight when they matter the most.

JM: Can you talk about some of those specific circumstances where you are inviting men to fight back?  You aren’t referring to the battlefield, but is it the home, the workspace–what are some more specifics of those?

CG: The last thing I would want to do is say to guys to go pick fights. That is not what we care called to do. In the book, I really look at three specific areas that make men weak. We talk about lust, entitlement and pride. I think those big problems are causing guys to disengage from the real battles.

Another thing is that a lot of people don’t think about, is issues of purity. A lot of men will just say, well we are men and we always have to look at women or be lustful, whatever. It is not that big of a deal. It really is a big deal. I believe we should fight for purity.

I also think that in a world that we deal with lust and talk about pride, lust is our “want it”, entitlement is “deserve it”, pride is “I can handle it.”

A lot of guys are getting ahead of themselves by pursuing material things and getting in massive financial bondage.I think we need to fight for financial freedom so that we can be generous and use our resources to help others.

JM: Craig, as you are sharing this message, how are men responding to it?

CG: The thing I know about men is that when you tell a guy what he is not, he is going to believe it. When you tell him what he can’t do, he will believe it.  Even in the church world, the difference between a Mother’s Day sermon and a Father’s Day sermon is always funny to me. Mother’s Day, we tell mothers how great they are and Father’s Day we tell them how pathetic they are. That does not work with us because if we don’t feel like we can win, we don’t want to play. So, what I am trying to do in this book is really help and see that you are created with a heart of a warrior.

I want to tell men, “There is divine potential in you.  You have, by the power of God, the ability to stand up and fight.” That resonates with men. It is almost like when someone you respect says, “I believe in you.” Then you better believe in yourself.  I am trying to help and see that God believes in them even though our enemy specializes in making strong men weak. Our God specializes in making weak men strong. That resonates deeply with the heart of men. I am thrilled to see them responding well already even the book has barely been out.

JM: Yes, and in the book you say “weak is the new strong.”  Can you say a little more about this? What does that look like in the life of a man?

CG: Pride is such a big issue for us. We will drive 27 miles completely lost before we ask for directions because we want to think we can handle it ourselves.  I work with men all the time that get into dark situations and maybe they are battling with an ongoing addiction. I will always tell them, “Look, you are a smart guy. If you could have gotten out of this by yourself, you would have done it a long time ago. You simply can’t. You think you are strong enough to handle it, but you are not. What you really need to do is admit openly that you are weak and you are vulnerable in this area and that is when God’s strength can be made perfect through you. If you are going to try and fight with your own strength, that is very limited. God’s strength is everything you need.”

I tell men, and this is true for me, “you are only as strong as you are honest.” If you are not honest and vulnerable and transparent, you are going to get kicked. You are going to get kicked hard. So, I look at Samson who is a strong man. We are not called just to be the alpha type-A strong guys. We really need to be transparent. We need to be vulnerable. We need to ask for help. We need to be honest about temptations, our vulnerables and our sins. That is when and the community, strength of other people, by God’s power we actually can overcome and we can win. We can do what he has created us to do.

JM: Not too long ago, pastor John Piper upset a lot of Christians when he remarked that God gave Christianity “a masculine feel.” Is that consistent with your views and message?

CG: I have a ton of respect for John, but I think that Christianity is broader than a masculine view. I think the imagery for God is Heavenly Father. He also cares for those as a mother would care for her hens. I think as a man, I enjoy relating to God as my Heavenly Father, but I think it would be a mistake to limit him and try to put a gender handle on Christianity. 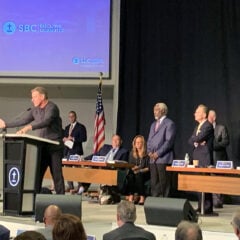