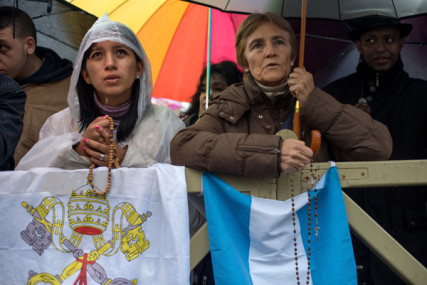 ROME (RNS) Italy’s capital is enjoying a boom in tourists from Latin America due at least in part to the popularity of Pope Francis, according to new figures from the city government.

Overall, tourism in Rome — one of the city’s economic pillars — is up by nearly 7 percent so far this year, led by a nearly 20 percent increase in visitors from Latin America, according to Marta Leonori, Rome’s top tourism official.

Among the Latin Americans, the pope’s fellow Argentines are leading the way, with 66 percent more people traveling to Rome from the pope’s homeland compared to a year ago.

“We have seen a steady rise in tourism and it’s clear the election of Pope Francis is one of the main reasons,” Leonori said.

Europe, Asia, and North America remain the most popular points of origin for 12 million visitors to the Eternal City each year.

The overall economic impact on the city from the new increase may be muted, however, according to Italian media reports, since Latin American visitors to Rome generally spend less on average than their counterparts from other parts of the world.

For now, a visit to Rome and the Vatican appears to be the best way for Argentines to see the first Latin American pope. Francis told a group of students from Uruguay over the weekend that he did not envision returning to his native country until at least 2016.

Francis said when he makes the trip he’d likely visit neighboring Uruguay and Chile as well, since he was unable to travel to those countries when he traveled to Brazil for World Youth Day in July.