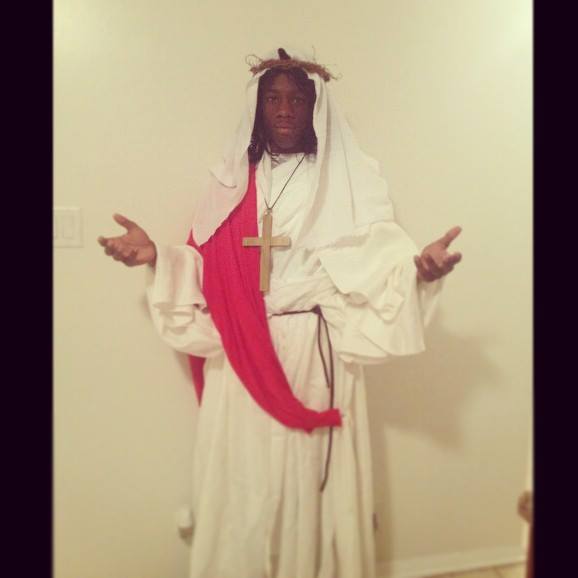 Marshon Sanders of Highland Park High School outside Chicago was briefly pulled out of class for his Jesus Halloween costume, but was later allowed to return.
November 1, 2013
Kevin Eckstrom

Now that you're all waking up from your candy coma ...

Marshon Sanders of Highland Park High School outside Chicago was briefly pulled out of class for his Jesus Halloween costume, but was later allowed to return.

Jesus was (briefly) expelled from a high school in suburban Chicago after school officials worried the costume might offend "religious sensibilities." When Marshon Sanders assured teachers he meant no offense, Jesus was allowed to return to class.

Legendary evangelist Billy Graham turns 95 next week and, according to son Franklin, he's already telling people to get ready for his 100th birthday party in 2018.

"This show will make people uncomfortable. And that's OK."

The NSA says it absolutely didn't spy on cardinals heading into last spring's conclave. Riiiiiiight. Forgive us for being skeptical.

Lauren Markoe looks ahead to next week's Supreme Court arguments in Greece v. Galloway, when the Supremes will be asked to find the limits on what's appropriate for prayer in town hall meetings.

Mother Jones' David Corn looks at the religious rants of Rafael Cruz, father of Texas Tea Party darling Sen. Ted Cruz, because "it's appropriate to take Rafael Cruz into account when evaluating his son the senator (who) ... has often deployed his father as a political asset."

Speaking of Texas, a federal appeals court said the state can go ahead with get-tough restrictions on abortion providers while the new law makes its way through the court system.

One in four of you thinks Jews killed Jesus, according to a new poll of anti-Semitic attitudes by the Anti-Defamation League, but that figure is actually down from a few years ago.

Irony or travesty? There are reports that Hitler's Gestapo chief, Heinrich Muller, was actually buried in a mass grave in a Jewish cemetery in the middle of Berlin near the end of WW2.

Remember the pope's interview with a prominent Italian atheist, when he said everyone (even atheists) just needs to follow their conscience? Apparently he wasn't too happy that the interview was splashed across an Italian newspaper.

Signs of a coming change? The Vatican's doctrine chief says too many Catholics see priestly celibacy as "the relic of a past history which is hostile to the body,” but his tone appears to be critical on that score, not an indication that he's open to changing the rules.

Rocco says Pope Francis may name few new American cardinals next February -- only because many of the open spots (Philly, Baltimore, Los Angeles) already have (retired) cardinals who are age-eligible to vote in a conclave, and there's typically only one vote from each city.

Pastors in Kenya, worried about a rise in Christian-Muslim violence, are asking for AK-47's to defend their churches and congregations from attacks by militant Islamists.

With that, it's off to the weekend. Before you go, make sure we have your email address below so we can send you the daily Roundup to your inbox. It's free, and more satisfying than a Halloween candy sugar rush.