TOLEDO, Ohio (RNS) Vatican watchers waiting for the “Pope Francis effect” to guide the Roman Catholic Church in the United States into a new era did not see it in the pope’s recent appointment of Toledo Bishop Leonard Blair as archbishop of Hartford, Conn. 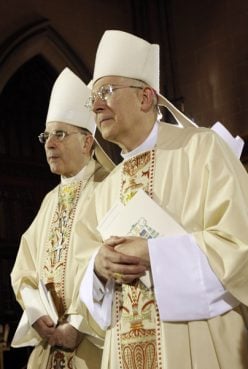 Robert Mickens, a Toledo native who covers the Vatican for The Tablet, a highly respected Catholic newsweekly in London, said from Rome that Francis has been critical of “careerist” bishops who aspire to larger dioceses, yet Francis promoted Blair who is “a careerist, no doubt.”

“It’s just more of the same,” Mickens said. “It’s clear that the same old ‘old-boys network’ is at work.”

In little more than six months on the job, Francis has named nearly a dozen bishops in the U.S., but only two — Blair to Hartford, and Bernard Hebda as the coadjutor archbishop of Newark, N.J. — have received major media attention. Hebda will inherit a diocese with a troubled record on sex abuse, and Blair was best known as the man Pope Benedict XVI tapped to lead an investigation on American nuns.

Because bishops are charged with implementing a pope’s vision for the global church, many observers are looking to see who Francis names to U.S. dioceses, as well as who he elevates as cardinals next February.

The new pope has urged priests and bishops to focus on their pastoral duties more than the enforcement of doctrine. In a June address to papal nuncios, whose job it is to nominate bishops, Francis said he wants them to pick pastors who are “close to the people, fathers and brothers.”

Bishops should be “gentle, patient and merciful; animated by inner poverty, the freedom of the Lord and also by outward simplicity and austerity of life.” They should “not have the psychology of ‘Princes.’”

Advocates for sexual abuse victims say that’s not the kind of man Francis promoted to Hartford.

“Either Pope Francis is asleep at the wheel and has no idea who he’s promoted, or he is ambivalent,” said Claudia Vercellotti, co-coordinator of the Toledo chapter of the Survivors Network of those Abused by Priests. “Either way, it’s dangerous.”

Peter Feldmeier, professor of Catholic studies at the University of Toledo, said he attends Corpus Christi University Parish in Toledo where “lots of people are not fans of him there,” but “my own personal experience with him has been very, very positive. He has been very pastoral on his part and very solicitous. … He has advocated for me even though I’ve been an ‘institutional resister’ in some ways.”

Members of SNAP and the Catholic reform group Voice of the Faithful protested outside the Cathedral of St. Joseph in Hartford on Wednesday (Oct. 30), the day after Blair’s appointment was announced in Rome. They criticized Blair for his actions when one of his priests, Gerald Robinson, was arrested in 2004 for the brutal 1980 murder of Sister Margaret Ann Pahl. Robinson, now 75, was convicted in 2006 and is serving a 15-years-to-life sentence in an Ohio prison.

SNAP said in a statement that while Blair and the diocese staff were not formally charged with wrongdoing in the Robinson case, “there remain a number of troubling unresolved questions about how Blair and his top aides behaved before and during that investigation.”

When Lucas County prosecutors requested the church’s files on Robinson, for example, the diocese turned over three pages with minimal information. The prosecutors returned months later with a no-knock search warrant and obtained a thick sheaf of documents on Robinson from the diocese’s “sub secreto” (or secret) church files.

The arrest and murder conviction of one of his own priests was a rude welcome for Blair, who was forced to deal with Robinson’s arrest just five months after being installed as bishop of Toledo a decade ago.

During that same period, the diocese was reeling from the clerical sexual abuse scandal that had erupted in Boston in 2002 and spread throughout the nation and world.

The Toledo diocese, which now reports on its website that 46 of its clerics have been accused of molesting minors between 1950 and 2012, paid a total of $1.9 million in settlements in 2004 to 23 people who sued for alleged child sexual abuse.

Blair lobbied strongly against Ohio Senate Bill 17, which would have extended the time limits for filing lawsuits on alleged sexual abuse of minors. The bill did not pass.

One Vatican expert who thinks Francis made a wise pick with Blair is Rocco Palmo, author of the “Whispers in the Loggia” blog.

Palmo said reporters who criticize Blair’s appointment as being out of step with Francis’ vision are being unfair. The 700,000-member Hartford archdiocese is in dire need of a leader with the managerial skills Blair has demonstrated in Toledo, he said.

Hartford is beset with “an aging infrastructure and shifting demographics” that “will require no shortage of tough calls over the tenure to come,” according to Palmo. Among the difficult financial moves Blair made in Toledo was to close 17 parishes and merge 16 others in 2005, citing a growing shortage of priests.

Mickens, who was critical of Blair’s overall record in Toledo, acknowledged that Blair is an experienced administrator, which is an important asset for bishops. “You have to include administrative skills” in deciding bishops’ appointments, he said.

Blair is better known for his expertise on doctrine, serving on the U.S. Conference of Catholic Bishops’ committee on doctrine. In 2009, he looked into the practice of Reiki, a holistic therapy involving the massaging of people’s “life energy,” and barred it from the Toledo diocese.

Blair’s expertise led to his being tapped by the Vatican in 2008 to lead the high-profile — and controversial — assessment of the Leadership Conference of Women Religious, a group representing 80 percent of America’s 57,000 Catholic nuns.

The assessment, often criticized as heavy-handed and one-sided, concluded that the LCWR was “silent on the right to life from conception to natural death” and that it did not promote church teaching on “issues of crucial importance to the life of the church and society, such as the church’s biblical view of family life and human sexuality.”

The Vatican called Blair’s findings “grave and a matter of serious concern,” and ordered a five-year reform of the nuns’ group, with Blair assisting in the oversight.

Mickens, who said he’s not sure “if Francis has been able to get a handle on the appointment of bishops yet,” sees Blair’s promotion to Hartford as a reward for carrying out the Vatican-ordered LCWR assessment.

“Many times those who take on these sort of ‘hatchet jobs’ for the Holy See are rewarded with promotions,” Mickens said.