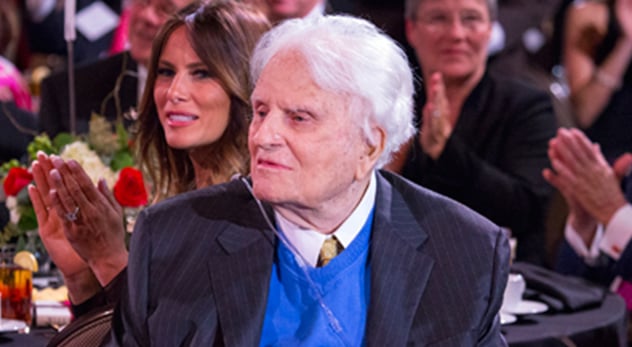 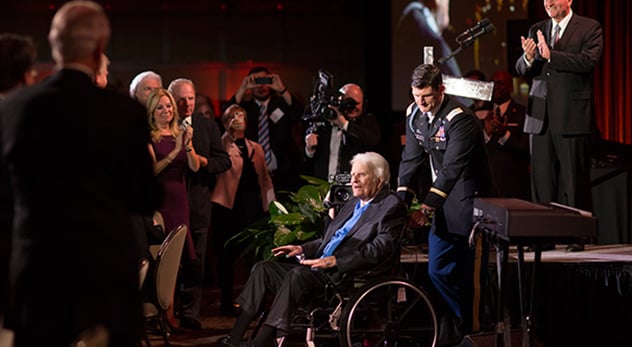 Five years ago, the Rev. Billy Graham celebrated nine decades of life at an event hosted by The Greenbrier hotel in West Virginia. The prominent evangelist, who was in better health at the time, delivered a short speech and joked that he hoped the crowd would return for his 95th birthday party. Last night, many of them did.

The two-hour celebration was held a short distance from Graham’s home at the Grove Park Inn in Asheville, North Carolina. FoxNews.com reported last month that between 600 and 700 were expected to attend, but according to Mark Demoss, who handles publicity for Billy Graham’s organization, the guest list wound up north of 850.

“Billy Graham, we need you around another 95 years,” Palin said. “We need Billy Graham’s message to be heard, I think, today more than ever.”

But the majority of attendees were not famous; they were fans. They were united by an appreciation for Graham and his commitment to preach the message of salvation in Jesus Christ. An unprecedented 215 million people in over 185 countries have heard the preacher deliver a sermon. Graham has maintained friendships with every American president since Harry Truman and has been called “America’s pastor.” 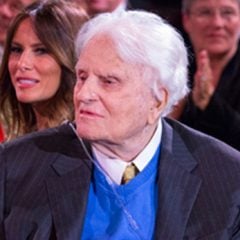 Several years ago, when Graham’s health was failing and he was losing the ability to conduct crusades in person like he used to, he said he wanted to preach one more time. According to Demoss, Billy’s son, Franklin, pulled the evangelist’s old pulpit out of storage and set it up in his office to test the idea. Reverend Graham stood but didn’t have the energy to preach an entire sermon. So Franklin had decided to film him speaking, lip synch it into foreign languages, and broadcast it on television stations in other countries.

The messages were compiled into a film called “My Hope”, and it has now been broadcast in 57 countries. Millions have become Christians as a result of viewing it. In America, some 25,000 churches have signed up to help distribute the film this month. A 30-minute version called “The Cross” aired last night at 10 pm on the Fox News Channel and will run on more than 480 stations nationwide.

It turns out that even at 95 years of age, Graham can still draw a crowd. But you wouldn’t know it by talking to him. According to an article released by The Billy Graham Evangelistic Association, when the world-renowned preacher was asked about plans to have birthday party, he raised an eyebrow: “Would anyone want to come to my party?”

“He’s afraid people have forgotten who he is,” Franklin said.

It’s this kind of rare humility from such an accomplished man combined with his enduring passion for sharing the Christian gospel that has made Graham the single most successful preacher in American history. And if you were sitting in the crowd of celebrants at Graham’s party last night, you might have crossed your fingers in hopes that America's pastor will be here a bit longer to keep sharing his message of salvation in Jesus Christ.

“We see this party as an exclamation point on his ministry,” Demoss said, “but I’m not prepared to say it is a period.”