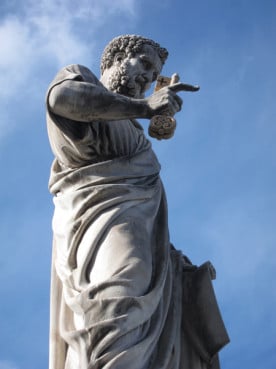 A statue of St. Peter in St. Peter’s Square at the Vatican. RNS photo by David Gibson

ROME (RNS) The Vatican said it would display for the first time bones believed to be the mortal remains of St. Peter, the leader of Jesus’ 12 apostles, to mark the end of the Year of Faith, Nov. 24.

Archbishop Rino Fisichella, president of the Pontifical Council for Promoting New Evangelization, wrote in Monday’s editions of L’Osservatore Romano, that the Catholic faithful making a pilgrimage to St. Peter’s tomb to mark the end of the Year of Faith will enjoy “the exposition … of the relics traditionally recognized as those of the apostle who gave his life for the Lord on this spot.”

Fisichella was referring to the long-held belief that Peter was crucified upside down and died in either A.D. 64 or 67 on the spot now marked by the Clementine Chapel inside the basilica that bears his name.

The church never officially declared the bones — which were discovered in the 1940s — authentic. But a series of exhaustive tests conducted on the bones between their discovery and 1968 convinced Pope Paul VI they had been “identified in a way we can hold to be convincing.” Previously, only the box containing the bones was on display.

Pope Benedict XVI declared the Year of Faith would begin on Oct. 11, 2012, to coincide with the 50th anniversary of the opening of the Second Vatican Council. Benedict said at the time that the Year of Faith was a “summons to an authentic and renewed conversation to the Lord.”