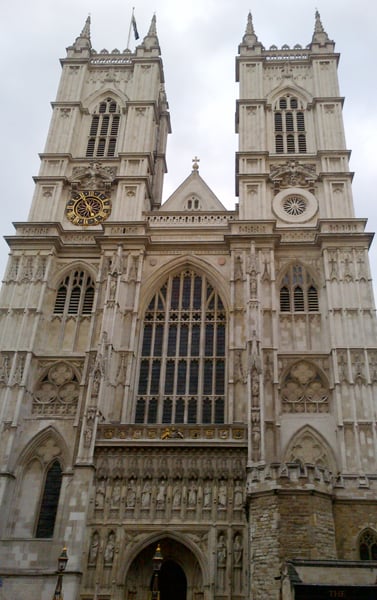 At an emotional worship service, considered one of the largest gatherings of Christians and Jews, some 1,600 British men and women filed into Westminster Abbey Sunday (Nov. 10) to mark the 75th anniversary of Kristallnacht. RNS photo by Trevor Grundy

CANTERBURY, England (RNS) At an emotional worship service, considered one of the largest gatherings of Christians and Jews, some 1,600 British men and women filed into Westminster Abbey Sunday (Nov. 10) to mark the 75th anniversary of Kristallnacht.

Also known as the Night of Broken Glass, Kristallnacht was a series of coordinated attacks carried out by Nazi paramilitaries and civilians against Jews throughout Hitler’s Germany and parts of Austria between Nov. 9 and 10, 1938.

More than 90 German Jews were killed and 30,000 more sent to concentration camps.

During the hourlong service, a candelabra from the Belsize Square Synagogue in central London was processed through the abbey where England’s kings and queens are buried.

“It was moving to see just how far Jews and Christians in Britain have come over the years,” said the Rev. James Hawkey, sacrist at Westminster Abbey. “The service was very much a symbol of the unity between us as we remembered the terrible events of November 1938.”

A boy cleans the street after Kristallnacht in November, 1938.

Julia Neuberger, the senior rabbi of the West London Synagogue, delivered the address. She said Christians and Jews were together on the 75th anniversary of Kristallnacht to commemorate a message of hope.

“So I want to remember those amazing British diplomats whose actions led to so many of us being here to tell the tale,” she said. “The story is still unfolding. But it is becoming increasingly clear, amongst all the justified criticism of Britain for not taking in more Jewish refugees in the late 1930s, that there was a network of consular and diplomatic officials, good Christians, who helped desperate people well beyond the call of duty.”

She ended saying: ”As we remember the terror, the death and destruction, the loss of parents, family and friends, let us use today, Jews and Christians together, to remember that ordinary people can do extraordinary things. They are why we have an obligation, as ordinary people, to help those others who are in fear of their lives the world over, to get round bureaucracy, to save even one human life. For in our tradition, he who saves a single human life is as if he had saved the whole world.”