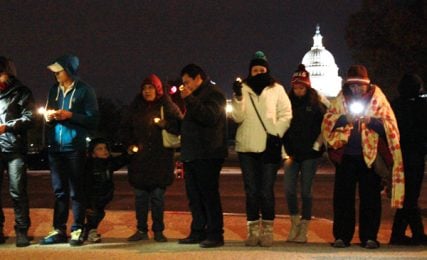 Immigration reform supporters pray and sing in both English and Spanish outside the U.S. Capitol on Tuesday night (Nov. 12), calling on Congress to pass comprehensive immigration reform. RNS photo by Katherine Burgess

WASHINGTON (RNS) Bundled in thick layers of clothing, supporters of immigration reform gathered Tuesday (Nov. 12) across from the U.S. Capitol to pray and sing for Congress to act.

“Fasting and praying is a powerful act for desperate times,” said the Rev. Al Herring from PICO National Network earlier in the day. “We are not desperate people, we are people of deep faith. We are committed to this cause, to this movement, and we are assured through God of its victory.”

The evening vigil marked the close of day one of the “Fast for Families: A Call for Immigration Reform and Citizenship.”

Gilberto Lopez listens to presentations and prayers during an evening prayer vigil on Tuesday night (Nov. 12) at the “Fast for Families: A Call for Immigration Reform and Citizenship,” a call for Congress to pass comprehensive immigration reform. Lopez lives alone in the U.S. while his family remains in El Salvador. RNS photo by Katherine Burgess

After the morning announcement that five activists will fast until Congress passes immigration reform, people packed a tent to hear from Rep. Zoe Lofgren, D-Calif., and faith leaders.

Most attendees were Hispanic, and both English and Spanish presentations were translated.

After the presentations, activists filed out of the tent to sing hymns and “This Little Light of Mine” as they held LED candles in the cold.

Ruben Quiroz sings a self-composed song for immigrants to the U.S. at the “Fast for Families” prayer vigil in Washington, D.C., on Tuesday night (Nov. 12). RNS photo by Katherine Burgess

Many at the event told stories of having themselves immigrated or having friends endure the pains of familial separation due to the immigration system.