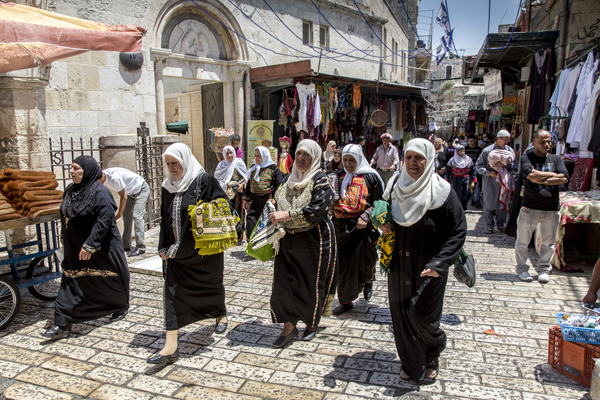 A scene from "Jerusalem" in which Muslim women from nearby villages are on their way to noon prayer at Al-Aqsa Mosque during the Islamic holy month of Ramadan. Photo by George Duffield, courtesy Jerusalem US LP/National Geographic Society
November 14, 2013
Lauren Markoe

(RNS) It may be as close as a person can get to praying at the Church of the Holy Sepulchre, the Al-Aqsa Mosque and the Western Wall, without actually going there.

A scene from "Jerusalem" in which Muslim women from nearby villages are on their way to noon prayer at Al-Aqsa Mosque during the Islamic holy month of Ramadan. Photo by George Duffield, courtesy Jerusalem US LP/National Geographic Society

The newly released movie “Jerusalem," filmed in 2D and 3D and playing on IMAX and other giant-screen theaters across the U.S. and the world, gives viewers grand, hallmark panoramas, at once awe-inspiring and intimate.

For years filmmakers had sought the rights to capture the city from the air, but never before had permission been granted, in part because the holy city is a no-fly zone.

Still, before filming began in 2010, producer Taran Davies came up with an extensive wish list of all the sites and rituals he wanted in the film, and presented it to advisers familiar with the spectrum of religious and secular officials who would have to approve.

“They all laughed and said forget about it,” Davies said. “They said, ‘It’s impossible and you’re not going to get half of what you’re looking for.'”

But his interfaith and multinational team persisted, presenting their case for a cinematic, nonpolitical portrait of Jerusalem to a seemingly endless list of authorities -- from the Israeli Air Force to the Supreme Islamic Council to the Armenian Apostolic Church. Eventually, over many cups of tea, Davies said, the producers got the green lights they needed.

In "Jerusalem," the camera swoops into the Garden of Gethsemane, where the Gospels place the arrest of Jesus, and the pilgrim-packed Church of the Holy Sepulchre to record the Orthodox Christian Holy Fire ceremony. It flies over the Western Wall to witness thousands of Jews receiving a priestly blessing from a rabbi and Muslims prostrating for noon prayers at Al-Aqsa, the site where the Prophet Muhammad is said to have ascended to heaven on a staircase of light.

The IMAX camera mounted on a crane films an unprecedented perspective of the Birkat Kohanim or "priestly blessing," at the Western Wall during Pesach in the film "Jerusalem." Photo by Nicolas Ruel, courtesy Jerusalem US LP/National Geographic Society

The film, distributed by National Geographic, makes reference to the conflict over Jerusalem, but does not dwell on it, instead emphasizing the long, strong roots tethering believers to the city’s ancient stones.

“Over time, this city became the gateway to God for three major religions, and the most fought over piece of land in history,” intones narrator Benedict Cumberbatch, whose voice will sound familiar to fans of PBS’ “Sherlock."

When the camera is set on solid ground, “Jerusalem” summarizes 5,000 years of the city's history, and introduces three tour guides -- all teenage girls and modern Jerusalemites -- one Christian, one Jewish, one Muslim.

It’s much to crowd into a 45-minute film. But Cumberbatch reads a tight script that starts with the Jebusites -- the pre-Israelite inhabitants of Jerusalem -- and hits the highlights of the stories of the city's Jews, Christians and Muslims.

"Jerusalem" also includes a good dose of archaeology, explained by University of North Carolina religious studies professor Jodi Magness, as the camera follows her through ancient passageways at the heart of the Old City. Special effects “build” Jerusalem's Second Temple, showing us what it might have looked like when its last stones were laid.

“I wanted to see where there was room to do something novel, to avoid the buzz words and cliches,” said Daniel Ferguson, a co-producer. “It was also important that the science in the film be up to date. Knowing the film will play for five to ten years in museums, we avoided anything that might date us, especially politics.”

"Jerusalem" ends on a hopeful note -- with the teenagers strolling through the city, expressing an openness toward people considered the enemy by many of their co-religionists.

But the lack of tension in the film may make those who have been to Jerusalem, or read news accounts, wonder if the producers went too far in sidestepping the animosity that also characterizes the city.

A reviewer in The Boston Globe wrote that it feels like Jerusalem’s ancient walls have been "whitewashed.”

But even if "Jerusalem" doesn't entirely avoid cliches, audiences disheartened by news of faltering Israeli-Palestinian peace talks, may nonetheless welcome it.

“Every religion has an assumption about one another,” says Nadia Tadros, the Christian teenager cast in the film. “We think we are so different, but we are more in common than we realize.”