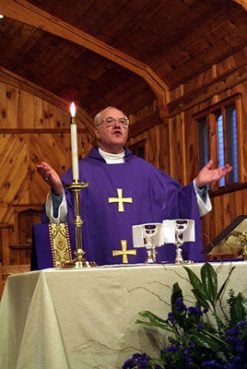 CANTERBURY, England (RNS) A former archbishop of Canterbury has warned that the Church of England faces extinction in less than 25 years unless it can attract more young people now.

Talking to 300 churchgoers in Shropshire, West England (Nov. 18) on the eve of a church agreement to start a campaign to evangelize England, Lord George Carey said: “We ought to be ashamed of ourselves. We are one generation away from extinction and if we do not invest in young people there is going to be no one in the future.”

Carey was Archbishop of Canterbury and leader of the world’s estimated 85 million Anglicans from 1991 until 2002 when he joined the House of Lords (Britain’s Upper Chamber of Parliament).

He said that every one of the church’s 43 dioceses (territorial units governed by bishops) could disappear within 25 years if an urgent campaign to attract the young was delayed.

“There is a prevalent view that people don’t want to hear what we have to say anymore.”

There are 25 million baptized Anglicans in England and Wales but fewer than one million of them attend services on Sundays, church statistics show.

“I am convinced that churches can grow, must grow and should grow,” said the 78-year-old retired prelate. “But to sit in a cold church, looking at the back of people’s heads, is perhaps not considered the most exciting place to meet new people and hear prophetic words.”