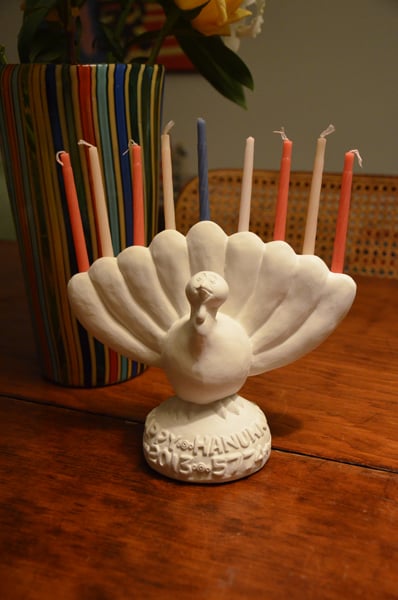 Every 70,000 years or so, Hanukkah and Thanksgiving overlap, permitting those of us who celebrate both to recall the Miracle of the Turkey. It goes something like this.

Many years ago, the British Empire invaded Boston, where every November the noble if obstreperous tribe of Yankees were wont to celebrate their New Israel by gorging themselves for days on succotash, baked beans, johnny cakes, and above all wild turkeys. In due course, the Brits were driven out, but not before they had amused themselves by using just about every turkey in the neighborhood for musket practice.

And so, when the Yankees looked around to start the Annual Feast, all they could find was one scrawny bird, with a tiny breast and shrunken thighs. Nothing daunted, they chopped off its head, plucked its feathers, and shoved it into their reconsecrated Franklin stove. Lo and behold, after the bird was done, they managed to eat it for eight days straight. And so, to this day, we commemorate the miracle by subjecting ourselves to a turkey large enough to provide a week’s worth of leftovers.

Now, I expect some of you are saying, “But Mark, we never heard of the Miracle of the Turkey.” And I say unto you: It took 600 years after the Maccabees drove the invading Syrians from the Temple in Jerusalem for the Miracle of the Oil to be reduced to writing.

Yet others of you are saying, “But Mark, the real reason we celebrate Hanukkah for eight days is not some bubba-meise about a one-day’s supply of oil burning for eight days but because this festival was supposed to make up for our forebears having to miss Sukkot, the eight-day holiday requiring pilgrimage to the Temple.

Whererfore I say unto you, “Exactly right! Which is why, next week, we’ll be eating our super-sized turkey in a Thanksukkah.