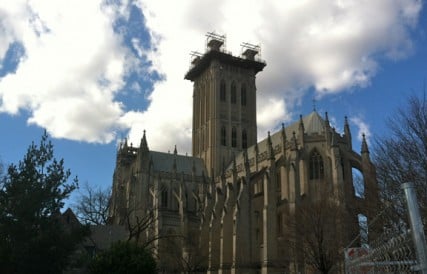 Scaffolding crowns the central tower of Washington National Cathedral, which was heavily damaged by a rare East Coast earthquake in August 2011. RNS photo by Annalisa Musarra

Adults will be charged $10, and seniors, students, children, veterans and members of the military will be charged $6, according to cathedral officials. Regular worship services and Sundays will remain free of charge; the ticket plan is scheduled for a six-month trial run starting in January.

“We are called to preserve and restore a building that is more than a century old and to offer programs that have a distinctive impact on our city, our nation, and the world,” said David J. Kautter, chairman of the Cathedral Chapter, the building’s governing board, in a statement.

“To support that work, we must implement this carefully developed fixed-admission policy.”

The rare 5.8-magnitude earthquake in August 2011 damaged the cathedral’s central tower, flying buttresses, decorative finials and intricate stonework. To date, the cathedral has raised $10 million toward its $26 million repair bill.

In 2012, the cathedral attracted 400,000 visitors beyond regular worship services, including scores of tour buses of children who are led beneath the cathedral’s soaring arches by teams of volunteer docents.

For years, the cathedral has operated in a deficit and experienced several rounds of layoffs and program cuts. The cathedral expects to break even in 2014 after a $1.6 million deficit in 2013, according to The Associated Press.

The cathedral has insisted that it remain a house of worship open to all faiths, not a museum of sacred artifacts. But, borrowing a page from the storied cathedrals of Europe that charge admission to tourists, the cathedral hopes an estimated $300,000 in annual ticket sales can help shore up finances and the building itself.

“The Cathedral does not receive any direct operating support from the federal government. Nor is it subsidized through the budget of any Christian denomination,” Kautter said. “While this financial independence increases the Cathedral’s freedom to speak freely in the public square and to convene people of all faiths, it also requires us to seek other means of ensuring our sustainability.”