(RNS) This week, millions of Americans will pause before diving into the turkey, stuffing and gravy to give thanks to God for the bounty on their table. 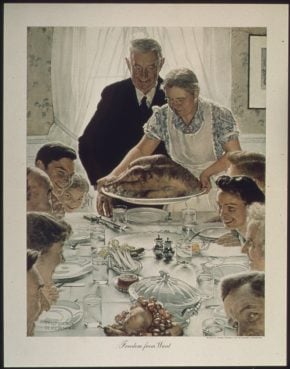 But many of the nonreligious will also include a moment of thanks, as “secular grace” grows in popularity among atheists, humanists, agnostics, freethinkers and other so-called “nones.”

“We give thanks for what is happening here and now,” said Maggie Ardiente, director of development and communications for the American Humanist Association, which last week asked members to share their secular grace on its website.

“It is important for us as nonbelievers to recognize that we are lucky in the grand scheme of the universe and to spend this time with our friends and family, and the tradition of doing that once a year, whether you are religious or not, is a valuable thing to do.”

While secular grace addresses no deity and involves no spirituality, those who say it say it still fulfills a need.

“What we do is thank people,” said Zachary Moore, a 33-year-old atheist in the Dallas-Fort Worth area. “Thanksgiving is like a microcosm of your life, when you can look at who has helped you get to the point where you have a family or a close circle of friends you can sit down with. As an atheist, I want to give thanks to those people and everyone around me. That is a real thanksgiving.”

The idea of a secular grace is not new. Unitarian-Universalists and adherents of other nontheistic faiths have said godless blessings for years, and Robert Ingersoll, “the Great Agnostic,” gave a “Thanksgiving Sermon” in 1897 in which he thanked scientists, artists, statesmen, mothers, fathers, poets and just about everybody except God.

Secular grace typically recognizes the animals who gave their lives for the feast, the people who prepared the meal and even the elements of nature that contributed to it — earth, water, fire and air. It also usually makes reference to the secular humanist touchstones of community, interdependence and relationships.

And there’s one more key difference between secular grace and the religious kind: Secular grace is not offered as a prayer, but more as a benediction over those present.

It’s unknown how many people offer up a secular grace. A Facebook page titled “1,000,000 People for a Secular Grace this Thanksgiving” attracted only 44 “likes” at its creation in 2010.

But polls reveal the number of those who adhere to no religion is on the rise — one in five Americans and one-third of all adults under 30, according to the Pew Research Center. And many “nones” observe elements drawn from religion. The same poll found 21 percent of the nonreligious say they pray every day.

“There is a big variance among people who are not religious,” said Jennifer Beahan, assistant director of the Center for Inquiry’s branch in Grand Rapids, Mich. Beahan, 25, has contributed a secular blessing at the city’s annual interfaith Thanksgiving service several times since its inception in 2000.

“There are some who never want to do another ritualistic thing in their lives because it comes from religion,” she said, “but there are others who like the ceremonial marking of things.”

Adam Lee is one of them. Lee, a New York City-based novelist and blogger, wrote “An Atheist Dinner Benediction” after reading an advice column that recommended atheists leave the Thanksgiving table when a religious grace is said.

“But that yields the floor to the religious and outs you as an atheist, which can disrupt the family peace,” he said. “I thought, ‘Let’s come up with something an atheist could say for grace.’”

“May this sharing of food foster peace and understanding among us,” it reads in part. “May it bring us to the recognition that we depend on each other for all the good we can ever hope to receive, and that all the good we can hope to accomplish rests in helping others in turn.”

At Deborah Strod’s Thanksgiving table, the grace is less formal, but no less important, she said. She and more than a dozen friends, family members and a stray or two gather at her father’s Massachusetts home and go around the table, one at a time, saying what they are grateful for.

“They get pretty deep sometimes,” said Strod, a 49-year-old lifelong nonbeliever. “My father once said something like he is grateful that out of matter comes art and creativity and love. I suppose others would be grateful to a god or gods for that. In our case, it just is, but it does not change the level of appreciation.”

Nor does the fact that those at the table are speaking to each other — and not to God — alter the importance of the ritual, she said.

“We are all sharing things that are touching and important to us,” she said. “I think that sharing, regardless of how you explain the origin of the things being shared, is the most important point. It is a point of deliberate and shared human connection meaningful to everyone there.”

Sarah Kaiser, 25, said her family used to say a religious grace before celebratory meals so steadfastly that today, even as an atheist, she jokes that she sometimes doesn’t know when to begin eating until grace is said.

But since Kaiser began identifying as an atheist in college, her mother has introduced “Quaker grace” at the Thanksgiving table — a moment of silence in which Kaiser says she tries to clear her mind and enjoy the presence of those she loves.

“I really like that,” Kaiser said. “It seems a lot more open and accepting than a lot of traditions.”

“An Atheist Benediction” by Adam Lee

“As we come together to share this meal, let us first remember how it came to us and be thankful to the people who made it possible.

This food was born from the bounty of the Earth, in warm sunlight, rich earth and cool rain.

May it nourish us, in body and mind, and provide us with the things that are good for living.

May its consumption bring about the pleasures of friendship, love and good company.

And as we partake of this food in each other’s company,

as what was once separate from all of us becomes part of each of us,

may we also remember what we have in common and what brings us all together.

May this sharing of food foster peace and understanding among us,

may it bring us to the recognition that we depend on each other for all the good we can ever hope to receive,

and that all the good we can hope to accomplish rests in helping others in turn.

May it remind us that as we reach out to others to brighten their lives,

so are our lives brightened in turn.”

“We give thanks to Nature for all it has provided us.

For Family and Friends who walk with us throughout the years.

We give thanks for those who have touched our hearts and made us smile.

We give thanks to those who have alleviated suffering,

Who have championed a cause,

For those who have resisted unjust laws,

Who have fought against oppression and injustice, and have fought for the freedoms we enjoy.

We give thanks for those who have sacrificed their lives to make our world a better place to be.

We give thanks for those who have advanced our understanding of medicine and science.

Who have helped explain the workings of the Universe.

We give thanks to those who have applied paint to canvas in a way that stirs feelings deep within us,

Who have composed songs which make our spirits soar,

To all the people – past, present and future – who strive to better our world and make life worth living, to these people, we give our highest praise and our endless thanks.”

Religion Hub
What Americans can learn from other cultures about the language of gratitude
Follow us on Facebook!
Submit your photos to RNS