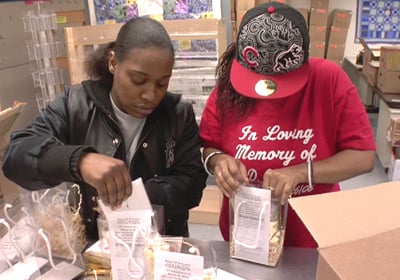 Members of the Soup of Success program in Elkhart County, Ind., learn job skills while packing gift baskets. A gift to Soup of Success, a food pantry and job training program run by the faith-based Church Community Services agency in Elkhart, Ind., would not be counted as religious giving before the new study. Religion News Service file photo

(RNS) This is Giving Tuesday, when nonprofits of every stripe hope to attract some of the billions of dollars to be spent during the Hanukkah and Christmas season.

Many of those dollars will go to religious groups. Now, new research is expanding the meaning of “religious giving.” It counts motivation for giving, and measures not only gifts to houses of worship but also donations to faith-connected nonprofits that are doing secular service such as fighting poverty or offering job training for the disabled.

“Most people cite their religious commitments, but most also cite the belief that they should give to benefit others. Many people hold both these impulses at the same time,” said Shawn Landres, a co-author of the research report, “Connected to Give: Faith Communities.”

The report, released at the recent American Academy of Religion conference in Baltimore, found that in 2012:

When the study looked at amounts donated overall in 2012, researchers found:

This aligns with research by sociologist Jonathan Hill of Calvin College, who studies religion and financial generosity.

“Giving is a transferable habit that happens to be cultivated in religious settings,” Hill said at the recent Society for the Scientific Study of Religion conference in Boston.

But the “Connected to Give” report also cites generosity thriving among people who claim no religious identity: 34 percent of these “nones” nonetheless give to religiously identified organizations.

Until now, most studies have defined “religious giving” as donations to religious congregations for specifically religious activities. It didn’t count as “religious giving” if you gave to a church’s soup kitchen, say, or to a combined-purpose group doing secular work such as the evangelical relief group World Vision.

The label also wouldn’t have covered several of the projects listed in the ninth annual “Slingshot Guide” — a handbook of nonprofit programs and projects that reflect Jewish values of prayer, study and good works. It was created to appeal to young Jews who often don’t participate in traditional Jewish philanthropic institutions.

The 2013-14 edition of the “Slingshot Guide” includes programs such as Innovation: Africa, which uses Israeli technology to bring “light, refrigerated medicine and clean water to nearly half a million Africans,” and the Sunflower Bakery in Gaithersburg, Md., where people with disabilities learn job skills baking kosher pastries.

The “Connected to Give” report was drawn from the National Study of American Religious Giving, sponsored by Jewish foundations and federations, and the philanthropy research organization Jumpstart.

Landres, who is also CEO of Jumpstart, said in an interview that the research had two purposes. One was to widen the understanding of who gives, why and where they give. The second was to wedge open new sources of venture capital to groups that had been shut out because they were religiously identified.

It’s a real issue: There are major funders that will not award grants to groups that they fear may proselytize or promote a specific religious view, he said.

“Not everyone is trying to spread their faith in their work. We think any group, religious or not, that can show they can get the work done and have the ability and moral obligation to do it well, should be heard,” said Landres.

“Giving is personal. People give as whole individuals and should not have to check their motivations at the door,” he said. “Those who are motivated by their faith to do good in the world deserve a seat at the funding and policy tables.”