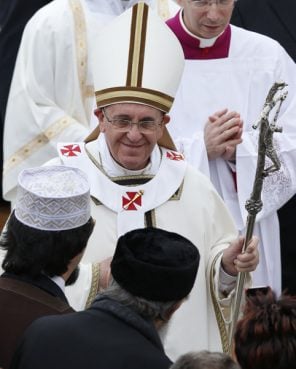 (RNS) Vatican officials say reports that Pope Francis has been slipping out at night to visit the homeless in Rome are “simply not true,” though that hasn’t stopped the stories from capturing the public imagination.

That’s probably because such tales seem right in line with Francis’ unconventional and pastoral style. What’s more, the faithful always love it when a church leader sneaks under the radar to make a point — witness the fascination with the Mormon bishop who recently disguised himself as a panhandler and then revealed his identity when he climbed into the pulpit.

But breaking out of the “gilded cage” of the Vatican has been a dream of many popes and other churchmen who fear losing touch with their calling as pastors — or simply their connection to ordinary life.

Here are five examples, mostly true, of other churchmen who have gone off the grid: Pope John XXIII is carried on a papal throne to the opening session of the Second Vatican Council in 1962. Religion News Service file photo

POPE JOHN XXIII, who died in 1963, had a famously folksy approach to the papacy that has drawn comparisons to Francis — hence the many anecdotes about “Good Pope John” walking out at night, dressed in simple black clerical garb, to enjoy the Roman evening or to visit the sick. His peregrinations even led Time magazine to dub him “Johnnie Walker.” (John XXIII enjoyed a cocktail as well.)

John XXIII, who will be declared a saint next year, was also famous for visiting the nearby Regina Coeli prison, and he wasn’t the first pontiff to do so: Innocent X, in 1650, and Clement XI, in 1704, paid surprise visits to Roman prisons, and many popes — including Francis — have made similar trips, though usually in the public eye.

POPE PIUS XII was best known for his reticent, aristocratic bearing — and in recent decades for debates over whether he did enough to save European Jews during World War II. But one of Pius’ longtime champions, an American Jew named Gary Krupp, in 2011 uncovered documents that he says indicate Pius dressed in the brown robes of a Franciscan monk during the war and helped spirit Roman Jews to safety behind the Vatican walls.

CARDINAL AGOSTINO CASAROLI was secretary of state to Pope John Paul II, helping direct one of the most sensitive, high-wire diplomatic acts in history as John Paul’s second-in-command in the struggle against Soviet communism. But Casaroli’s best-kept secret may have been the regular ministry he maintained as a chaplain at a juvenile detention center on the outskirts of Rome.

Casaroli would often slip out of the Vatican on a Saturday evening, leaving word that he was “resting” and unavailable. He would then travel by city bus to the detention center dressed as a priest and would call himself “Father Agostino.” Few knew of this work until John Paul revealed it in a funeral homily for Casaroli in 1998. 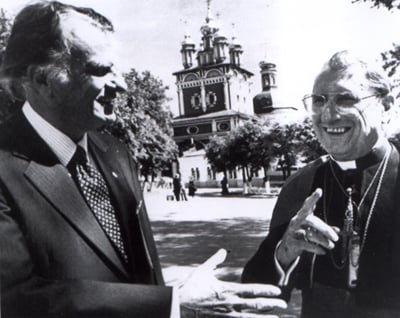 Zagorsk, Russia — (From left) Billy Graham and Cardinal John O’Connor stand in front of the belfry of the Zagorsk monastery June 9, 1988. Both attended the festivities of the Russian Christian millennium. Religion News Service file photo

CARDINAL JOHN O’CONNOR of New York was a confidant of John Paul as well, though never a Vatican official. And O’Connor, too, had something of a secret ministry: the cardinal, who often suffered from insomnia, would pay late-night visits to St. Clare’s Hospital, where he established a wing for the sick and dying early on in the AIDS crisis.

“For many years after that, without publicizing it, the cardinal visited AIDS patients, sought to comfort them and even changed bedpans,” former New York Gov. Mario Cuomo wrote in a 2000 eulogy for O’Connor.

POPE JOHN PAUL II himself tended to view his pastoral ministry as a public event. “If it doesn’t happen on TV, it doesn’t happen,” he liked to say. But John Paul, an avid skier and hiker in his native Poland, could not resist the siren call of the mountains outside Rome, and on at least 100 occasions slipped away for some incognito schussing or mountaineering — sometimes even fooling the Swiss Guards who were sworn to protect him.

“We did it!” the pope said with glee after the first such escapade, according to a 2007 memoir by his longtime personal secretary, Cardinal Stanislaw Dziwisz.

Then again, not all such papal flights have been voluntary. As recently as 1848, Pope Pius IX had to flee the Vatican disguised as a priest — a persistent urban legend says he was dressed as a woman — ahead of rioters during Italy’s struggle for national unification. That story is a true fact, but not one the Vatican is likely to be highlighting anytime soon.