Do you have a question about life, love, or faith? Submit it online, fill out the form below or email it to [email protected].

I’m wondering how to view my recent abortion through the lens of someone who considers herself a person of faith. I grew up in the church and still belong to the same denomination that believes in reason as well as the Bible. I’ve always considered myself pro-choice. And I preferred (almost expected) that choice would fall to someone else.

However, at the age of 43, and even with an IUD (which I later learned fell out during ridiculously heavy periods), I learned I was seven weeks pregnant. At the time, I was scheduled for a tubal ligation. I wasn’t on the fence about having children — I was having no more children. I told my live-in boyfriend shortly after we met I was having no more children. I have two elementary school-aged kids by my late husband, who died in a car accident 10 years ago. I adore my children and spend most of my time and energy feeding, helping, cajoling, disciplining and taxiing them to activities and play dates. Our lives are full and mostly happy. I live thousands of miles from my home state and have no family support nearby.

My boyfriend (who’s older than me) has never had kids of his own. I told him if he really wanted a biological child and really wanted to help raise one, I would consider having another baby. But neither of us could get to “yes.” He was and is supportive of the decision we made together. And we are a family of four.

I was an emotional wreck the first two weeks after the termination — I wanted a “do-over.” I wanted to reverse my decision. I sobbed and told my BF maybe we should try to have a child. After the hormones subsided, I remembered why we made our choice. And now, I don’t regret the abortion — I do regret getting pregnant. Plenty of people would tell me I’m taking the express elevator to hell. I wish I could be more open about what I’ve been through. How can I say I believe in God and in the decision I’ve made? 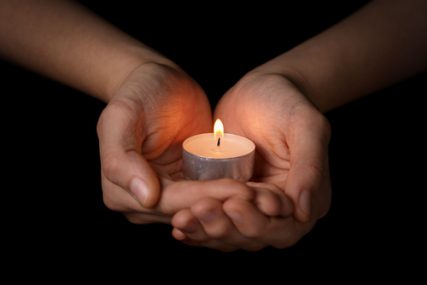 Even though you and your boyfriend behaved responsibly; even though, in the IUD, you employed one of the most reliable forms of birth control that is available; even though you reached the decision to terminate your pregnancy in a careful, ethical, and sober manner; even though there is nothing that you could have done better or differently; even then, you’re still allowed to grieve.

In order to make some room for the hard and necessary work of grieving, Sarah, let’s spend some time thinking about Christian ethics and abortion. And let’s begin with the Bible.

Given the intense opposition to abortion in so many Christian circles — given the often deep conviction that terminating a pregnancy invariably constitutes killing a human being — you would think that, as Jonathan Dudley puts it, “this position is clearly taught in the Bible… You’d be wrong.”

Scripture is silent on the subject of abortion. While Deuteronomy 30:19, to choose a frequently cited passage, may sound like an anti-abortion rallying cry when read by itself (“choose life”), reading the surrounding text reveals a speech by Moses to the people of Israel in which he entreats them to remember their covenant with God and in which he mentions abortion nowhere. Now, one may well infer opposition to abortion in Deuteronomy 30:19, much as ecological theologians hear in it a reminder of our dependence on and responsibility to creation (“I call heaven and earth to witness against you”). But there is nothing in the text which demands either interpretation.

The absence of biblical teaching on abortion is one of the big reasons that the Christian movement has historically kept room for a broad range of opinions on this subject. As Letha Dawson Scanzoni demonstrates in her extraordinary article, “When Evangelicals Were Open to Differing Views on Abortion,” there was a time well within living memory when a conservative Christian publishing house could issue a book which stated that some Christians “consider [abortion] murder; others say the operation might be an act of mercy”; when a fundamentalist Baptist pastor could support the Roe vs. Wade decision with the words, “I have always felt that it was only after a child was born and had a life separate from its mother that it became an individual person, and it has always, therefore, seemed to me that what is best for the mother and for the future should be allowed”; when Christianity Today could publish an article which argued that, “God does not regard the fetus as a soul, no matter how far gestation has progressed.” It is only in the last 30 or 40 years that opposition to abortion has become a non-negotiable for many Christians.

That entrenchment is a shame. Because both the Christian movement and our wider society are impoverished by the absence a vigorous and mutually respectful conversation around this question. As things stand, we are stuck in a national shouting match. A shouting match, ironically enough, in which the utterly polarized combatants are in full agreement that terminating a pregnancy is a morally simple matter: on the one hand it is about killing a baby and, therefore, access to abortion is always wrong; on the other it is about bodily autonomy and, therefore, access to abortion is always right.

But abortion isn’t simple. It is an essentially ambiguous moral matter. And deeply faithful Christians, who read Scripture and love Jesus, can and will disagree about it.

Insofar as I can reduce my own opinion to a sound bite, I will agree with those who hope for a time when abortion will become a rarity. I hope that it will become a rarity not because we have forbidden it (both contemporary research and the horrifying history of back-alley abortions demonstrate that prohibition doesn’t work) but, rather, because we have dramatically reduced demand. That means making highly effective contraception available universally, affordably, and without hassle or shame. It means abandoning the disaster which is abstinence-only education and admitting that well-educated and empowered kids make safer, smarter, and more responsible decisions. And it means reducing the financial disincentive to have a child by establishing laws, policies and practices which provide for generous maternity leave and affordable day care and which help nurture living-wage jobs.

But let’s get back to you, Sarah. What you are discovering right now is that abortion is something that we experience a whole lot differently when it affects us directly. Lots of people were resolutely opposed to abortion until a child or a sister or a friend was faced with the crisis which is an unwelcome pregnancy. And lots of women, like yourself, felt an unexpected ambivalence and even sorrow when the choice which they had supported for so long became their own. (I’m glad that you mention hormones. As my friend Lauren says, “One of the things we often neglect about abortion, pregnancy, and birth is just how intensely the body carries its own experience and influences our mental and emotional states.”)To take us back to where our conversation began, lots of women were surprised by grief.

So what do you do with your grief? I have two suggestions. First, find a safe place to name that grief out loud, a place in which people will listen without judging, a place in which, as you say, you can speak openly about your abortion. I have heard great things about Exhale for after-abortion counseling — they identify neither as pro-choice nor as pro-life but, rather, as pro-voice. As Exhale’s website explains, being pro-voice is about “creating a social climate where each person’s unique experience with abortion is supported, respected, and free from stigma… pro-voice points towards a whole new way forward on abortion conflicts by giving new focus to an element typically exploited or ignored: personal experience.” Give them a call.

Second, no matter how many people are ready to sit in judgment of you, no matter how many are ready to engage in the monumental hubris of putting themselves in God’s place and declaring you to be damned, keep reminding yourself that they are wrong. Know, now and always, that Scripture’s promise is for you: “I am convinced,” Paul says, “that neither death, nor life, nor angels, nor rulers, nor things present, nor things to come, nor powers, nor height, nor depth, nor anything else in all creation, will be able to separate us from the love of God in Christ Jesus our Lord.”

I am similarly convinced, Sarah. I am convinced that, as much you are hurting right now, you remain God’s beloved daughter. And deeply faithful Christians, who read Scripture and love Jesus, can and will disagree about it.