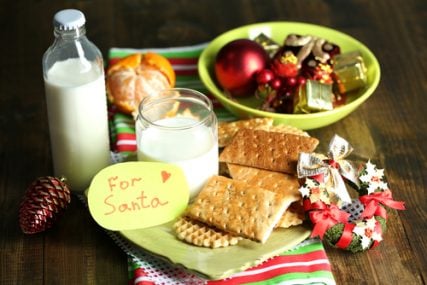 WASHINGTON (RNS) Nearly one in three Americans, including many with no little children at home and those with no religious identity, say they pretend Santa will visit their house on Christmas Eve.

Overall, 31 percent of  U.S. adults play up the Santa role in their holiday season, according to a survey released Wednesday (Dec. 18) by the Pew Research Center.

Jesus, however, is still the star of Christmas.

The survey finds that 73 percent of adults believe Jesus was born of a virgin — the act of God at the theological heart of the Christmas story, the birth of the Christ child.

That belief is held overwhelmingly by Christians of all stripes and even by some people with no formal religion: 32 percent of “nones” say they, too, believe in the Virgin birth of Jesus.

Women are more certain of this than men, though: 78 percent of women and 69 percent of men say they believe it.

“Women tend to be more religious by most measures such as church attendance and the importance of religion in their lives. This carries over into Christmas,” said Greg Smith, director of U.S. religion surveys for the Pew Research Center.

Overall, the majority (51 percent) say Christmas is more of a religious holiday. That’s a statistical tie with the 49 percent figure reported in a Public Religion Research Institute/Religion News Service survey released Tuesday. Where the two surveys divide significantly is that Pew finds 32 percent of Americans see this as mostly a cultural holiday season, while PRRI/RNS found 26 percent celebrate a cultural Christmas.

Pew asked 2,001 people about how they celebrate the Christmas season, their memories of childhood Christmas, and what they like or dislike most about the season. The survey was conducted Dec. 3-8 and has a margin of error of plus or minus 2.6 percentage points.

Gathering with friends and family tops the list of activities, at 86 percent. For 69 percent, this socializing is their favorite part of the holidays.

But the other most frequent activity — buying gifts — led to some surprising findings, said Besheer Mohamed, Pew Research associate.

While 86 percent say they expect to buy gifts for friends or family this year, “only about 4 percent say what they look forward to most is buying gifts. It’s not even in the top five favorite things to do.”

However, the top three things on the list of things people like least about the holidays all relate to gift buying, Mohamed said.

This doesn’t mean they’re switching to homemade gifts such as baked goods or crafts. Only 58 percent say making gifts will be among their activities this season, compared with 66 percent who say they “typically” did so when they were children.

Other notable shifts from the past include:

News
Armenian Christian community caught between Israelis and Palestinians
Follow us on Facebook!
Submit your photos to RNS