His Noodliness recently touched down next to a Festivus pole, a Winter Solstice Nativity scene and a 30-foot Christmas tree in the Wisconsin State Capitol. A fan of warmer climes, the Spaghetti Monster has also taken up residence in Florida’s capitol rotunda. 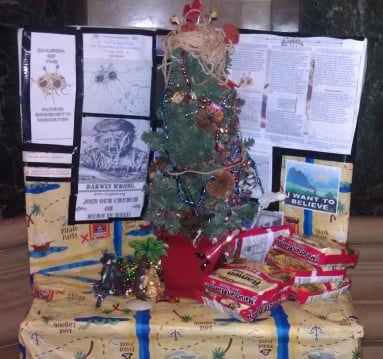 A sign at the Wisconsin display shows the Pastafarian deity hovering above earth and tells passersby:

“HE BOILED FOR YOUR SINS! BE TOUCHED BY HIS NOODLY APPENDAGE BEFORE IT IS TOO LATE!”

Sound ridiculous? The Atheists, Humanists and Agnostics at UW-Madison agree. That’s why they brought in His Noodly Appendage. On the sign, the group writes, “Religious ideas should not be promoted within the halls of government. Protect the separation of Church and State, it protects us all.” 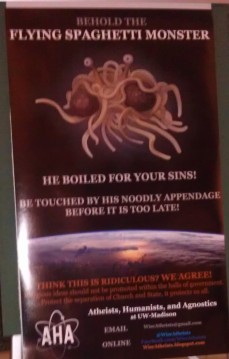 Should religious displays be banned from state capitols? Or should every group be permitted to display whatever they like (including Satanists in Oklahoma)?

In His noodly name we pray, Ramen.