(RNS) ‘Tis the season for giving — but not always for receiving.

As the holiday season peaks, atheist and humanist groups around the country have seen their charitable impulses rebuffed by both Christian and secular organizations. Recent incidents of “thanks, but no thanks,” include:

And in what is perhaps the biggest rejection, the American Cancer Society, in 2011, turned away $250,000 from the Stiefel Freethought Foundation, a nonprofit dedicated to humanist causes. Though the society never cited atheism as the reason, many atheists drew that conclusion.

Dale McGowan, executive director of Foundation Beyond Belief, a humanist nonprofit, said his group’s grants have been rejected at least eight times. The foundation, which has given away $1.4 million, does not proselytize for nonbelief and requires that its beneficiaries — some with religious roots — do the same.

It starts with a “Gosh, thanks,” he said, and ends a few days later with “Thanks, but we can’t accept that.” McGowan thinks those who reject FBB’s grants — usually $10,000 each — worry about the perception of being associated with atheists.

And that, he said, is a mistake. “I don’t think most religious people give for the glory of God or because scripture tells them to. I think they give because they are good-hearted people and they feel empathy for others, and that is really no different for those with a nonreligious world view.”

Hemant Mehta said empathy drives him and readers of his blog, the Friendly Atheist, to raise funds for various causes. In the past, he’s helped raise $3,000 for a South Carolina church vandalized with atheist graffiti (donation refused) and a similar amount for an Ohio pastor badly beaten by a man identifying as a “militant atheist” (donation accepted).

Recently, he asked readers to donate money to a Morton Grove, Ill., park after an expected $2,600 donation from a local veterans group was withdrawn because a park board member declined to stand for the Pledge of Allegiance. Mehta, who lives in nearby Naperville, Ill., raised more than $3,000 and sent the city a check.

The park district returned the check with a message saying it did not want to appear “sympathetic to” any political or “religious group.”

Such rejections put Mehta in a bind, he said. He feels obligated to distribute the money in a way that will honor the spirit in which it was given — hard to do when the would-be beneficiary won’t cooperate or return his calls and emails. 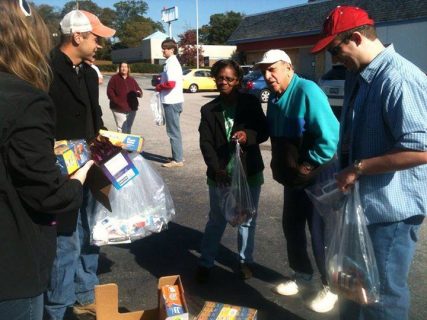 In the case of the South Carolina money, he donated it to a women’s shelter in the same community. The park money has been sent to the Morton Grove Library to be used as the library sees fit. To date, the check — sent on Dec. 3 — has not been cashed, and Mehta was told Thursday (Dec. 19) that the check would be returned.

“It’s frustrating,” Mehta said. “As atheists, we don’t have a church we can donate to, so we do it on a case-by-case basis. But sometimes it is tough to help because they feel it is dirty money.”

But William Enright, director of the Lake Institute on Faith & Giving at Indiana University, noted that studies show many nonreligious people give to religious charities.

Those questions confronted the Kansas City community in November when the local Rescue Mission, a Christian organization, turned away the Kansas City Atheist Coalition. The two groups worked successfully to distribute food to the needy in years past.

Lee Chiaramonte, founder of the Micah Ministry, which the Rescue Mission ultimately partnered with, said she was “scandalized” by the rejection of the atheist group. She said her ministry does not ask those who seek its help about their religion or philosophy and it doesn’t ask that of its volunteers, either.

“My gosh, they were they wonderful to work with,” she said of the atheist volunteers. “They were enthusiastic and hard-working and they’ll be back to work with us for Christmas and we are delighted.”