(RNS) An organization billing itself as a Christian alternative to the Boy Scouts of America says it has close to 500 troops preparing for its Jan. 1 launch.

The new scouting group, Trail Life USA, was created by OnMyHonor.net, which opposed the BSA’s policy change last May that permitted gay Boy Scouts — but not gay adult leaders — effective on Jan. 1.

Mark Hancock, Trail Life USA’s chief operating officer, said close to 500 troops have signed up since early September, a handbook has been created and leadership guides have been published for three levels of boys in kindergarten through the 12th grade.

“We have a very excited group of churches and Christian organizations that are joining us,” said Hancock in an interview Thursday (Dec. 30). “They’re ready to go.”

He said the organization has “hundreds of volunteers all over the country” and will have a staff of six on Jan. 1 in virtual rather than brick-and-mortar offices. Hancock said many participants are evangelical Christian, but a number of Catholic troops are starting as well.

“Our focus is not really on numbers but it’s on providing a quality program for families to help the boys become men,” he said.

Those that have signed up — and paid $325 for the first year’s charter fee (it will subsequently be $185 annually) — include churches and other groups with a statement of Christian beliefs, such as a Christian home school organization or a Christian camp.

Trail Life USA’s values statement includes a section on purity that reads, in part: “We are to reserve sexual activity for the sanctity of marriage, a lifelong commitment before God between a man and a woman.”

Religious groups sponsor about 70 percent of the BSA’s 100,000 troops; after the policy change was announced, most of the major sponsors — Mormons, Catholics and United Methodists — agreed to remain with the BSA despite unease in some corners about lifting the gay ban.

Deron Smith, spokesman for the Boy Scouts of America, said “it would be inappropriate for us to discuss other organizations,” but added “what we’re hearing from our councils is that only a handful of chartered organizations have decided not to renew their sponsorship of troops. We are thankful that the overwhelming majority of our units and members remain committed to the Scouting program.” 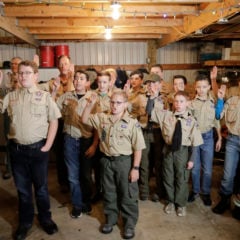 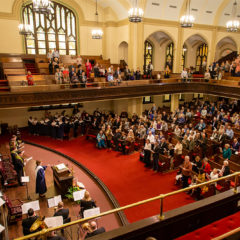