(RNS) Pope Francis inspires Catholics and non-Catholics alike with his focus on the gospel call to serve “the least of these.”

Our faith calls us to put first the needs of our brothers and sisters who suffer in poverty, and Catholics are justly proud of our network of schools, hospitals and social service ministries that work every day to help the poor and vulnerable.

Yet the ability of these ministries to live out the fullness of our faith is in jeopardy.

The mandate from the Department of Health and Human Services forces countless Catholic schools, hospitals, and social service organizations to participate in providing employees with abortifacient drugs and devices, sterilization, and contraception in violation of Catholic teaching. The mandate went into effect on Jan. 1; ministries now are faced with the choice of violating our deeply held beliefs or paying crippling fines.

If these ministries don’t comply, the financial penalties may mean that some may have to close their doors. As that happens, the poor and those who serve them will be hurt the most. Forcing our ministries to divert funds from serving their neighbors to paying government fines will have real consequences for real people.

I worked for Catholic Charities for more than two decades, and in that work I quickly learned that poverty isn’t an abstraction. It affects people with names and faces and families and friends. They’re our brothers and sisters, and we’re called to be there when they need our help.

When the elderly poor need help, for instance, the Little Sisters of the Poor are there to serve them. The Little Sisters went to court to prevent the government from forcing them to act against their beliefs or pay crippling fines under the mandate.

On New Year’s Eve, the Supreme Court issued an order offering them temporary protection. Unfortunately, there are countless groups just like the Little Sisters that have not received such legal protection, groups that still face government fines for living by their beliefs.

One recent federal court decision offers a window into just how many people might be affected by the fines the mandate imposes.

Deciding on religious liberty grounds that the government couldn’t enforce the mandate against the dioceses of Pittsburgh and Erie and their related service ministries, the court noted that “Catholic Charities (of Pittsburgh) provides approximately 230,000 acts of service for people in need in Southwestern Pennsylvania,” including “adoption, counseling, safety net and stability services, health care for the uninsured, housing and homeless assistance, pregnancy and parenting support, and refugee and senior services.”

Similarly, the court found that social service organizations in the Diocese of Erie provided aid to some 56,000 people a year, “including many who would otherwise not receive necessary food, shelter, and other services.”

Extrapolate these numbers from part of Pennsylvania to the rest of the country and you can see what’s at stake. Is it any wonder that the court held that the mandate’s fines “will gravely impact Plaintiffs’ spiritual, charitable, and educational activities, and the individuals who rely on (them)”?

Once the government starts to enforce the HHS mandate against religious nonprofits, watch for consequences like these to begin to unfold over the coming months.

We have spent significant time and effort seeking sincere dialogue with the Obama administration in hopes of preventing this impasse, and we are long-standing advocates of accessible, life-affirming health care. Yet our concerns continue to go unheard. The administration has crafted an “accommodation” that continues to compel our ministries to participate in providing drugs and services that violate our deeply held religious beliefs.

With the implementation date now upon us, we have made one more effort at dialogue, again asking President Obama to exempt nonprofit institutions caring for those in need from the harsh penalties imposed by the mandate.

The administration has shown flexibility in implementing other provisions of the Affordable Care Act, issuing numerous delays and exemptions for many employers and individuals.

We’re only asking that it offer that same consideration to those who want to live by their religious beliefs without facing government penalties for doing so. We continue to ask Congress to provide relief as well, and we look to the Senate to work with the House in that effort.

We know that the Constitution and the law protect us from heavy-handed government demands that we violate our consciences or pay crippling fines. 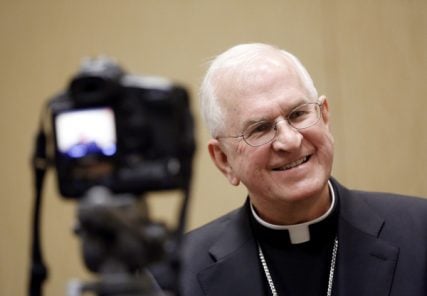 On behalf of those served by our schools, hospitals and social service ministries, we will continue to resist the burdens imposed by the HHS mandate.

We hope and pray that the administration and Congress will protect us from those burdens, and that the courts will uphold our freedom to serve those who depend on us.

(The Most Rev. Joseph Kurtz is the archbishop of Louisville, Ky., and president of the U.S. Conference of Catholic Bishops.)