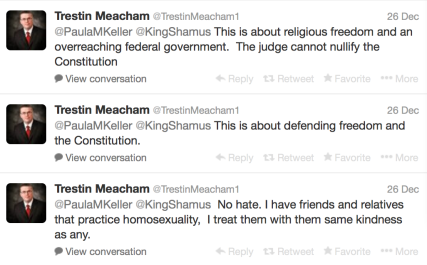 I read with interest in today's news that a Utah man has ended a hunger strike that was engineered to oppose same-sex marriage in his state. On December 20, as soon as a judge affirmed the right of gay couples to get married, Trestin Meacham stopped eating solid food. For two weeks he subsisted on water and vitamins.

It must have been one heck of a Christmas.

Meacham's fast is not terribly surprising, given the role of fasting in Mormon history and belief. And he's not the first Latter-day Saint to use a hunger strike as a weapon for social change; at the other end of the political spectrum, Sonia Johnson did it in 1982 to persuade Illinois state legislators to vote in favor of the Equal Rights Amendment.

Though Johnson had by that time been excommunicated from the Church for her feminist stance, her memoir makes clear that fasting for social change was a strategy born primarily from her Mormon heritage.

Perhaps it’s because of the example of Johnson—and the hate mail, death threats, and vitriol that she received at the hands of more conservative Mormons—that I am disappointed in the way some of my Mormon and post-Mormon compatriots have responded to Meacham’s fast.

The above examples vary from benign and funny (green Jell-O) to sinister and disturbing (death threats?!).

Here’s the sucky and glorious thing about being Christians. Being a molecule in the Body of Christ means that even when you want to amputate a hand or a foot, or even when you think that your vestigial appendix is living in another millennium and really ought to absent itself already, you don’t get that privilege. You don’t get to wish for so much as a haircut.

In fact, you shouldn’t even joke about the death of a member of the Body of Christ.

That’s the drill. We’re all in this Christ business together.

Don’t get me wrong; I rejoiced when Judge Shelby gave the all-clear for same-sex marriage, and I will rejoice again when Utah and all other states grant marriage equality and every other civil right to LGBTQ persons. I will do my part to talk about equality, blog about equality, and work toward political equality. If I thought it would help, I’d draw on my Mormon heritage and fast for change.

Equality is coming, and if anything I feel sorry for people like Meacham, who are on the wrong side of history and justice.

But I don’t want him to die because he disagrees with me.