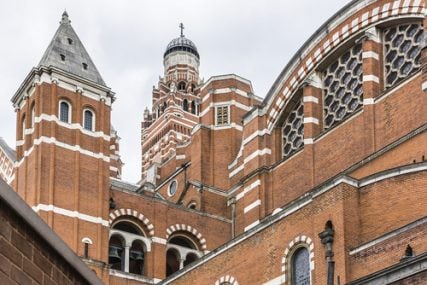 View of Westminster Cathedral (1895 – 1903) – mother church of Catholic community in England and Wales and Metropolitan Church and Cathedral of Archbishop of Westminster.

CANTERBURY, England (RNS) The number of Roman Catholic adherents in England and Wales fell by more than 90,000 in 2012, despite a wave of immigrants from Poland and other Eastern European countries with historically Catholic backgrounds.

Prominent Catholics say the recent wave of sex abuse scandals involving priests and children is responsible for the decline.

According to research by the Pastoral Research Centre Trust, an independent research organization, population increases, baptisms and the reception of newly confirmed and older people into the church should have added 31,873 people to the Catholic rolls in 2012.

At the end of 2011, there were 4.1 million Catholics in England and Wales, but in the next 12 months it fell back to 4 million.

Meanwhile, there is growing anger here that middle-class parents have their children baptized as Catholics so they can enroll them in well-run Catholic primary (ages 5-11) and secondary (ages 11-18) schools.

Last year, the Sutton Trust — a charity that aims to improve educational opportunities for young people from nonprivileged backgrounds — conducted a survey of 10,000 parents and found that one in 10 lied or greatly exaggerated their newfound Catholic faith to secure entry to religious schools for their offspring.

“The faith admissions system is being abused toward serving the affluent, when most church schools were originally established to provide education for the poor,” sad Rabbi Jonathan Romain, chair of the Accord Coalition, which advocates for open admissions to all state–funded schools.