(RNS) An Indiana man has built an eight-foot-tall, igloo-like chapel with only snow on his “snow day off.”

Tyler Watts, an economics professor at Ball State University, said it probably took him about 12 hours spread over three days to complete the chapel, complete with a cross carved out of snow.

Watts was supposed to start teaching classes on Monday, but the university closed for two days due to the weather. It was 13 degrees below zero when Watts did most of the work to build the snow chapel, he said.

Building igloos and other snow structures has been a hobby for Watts since he started one in 2009 in Michigan. He said he usually builds at least one each winter, but last year there wasn’t enough snow.

The snow chapel idea came to him while he was playing Legos with his two children on Sunday night during a snowstorm, and he told his daughter they would build a lego chapel. They wound up building a snow chapel instead, and she helped by handing him tools.

“I didn’t have a particular chapel in mind–it’s basically just a rectangle with a triangle on top,” said Watts, a member of Grace Lutheran (Missouri Synod) in Muncie. “I did want to have a cross on it, of course, to signify it as a chapel.”

Watts said he wanted the challenge of seeing if he could build a structure with a roof, as opposed to igloos that have domes where the blocks close in on themselves. 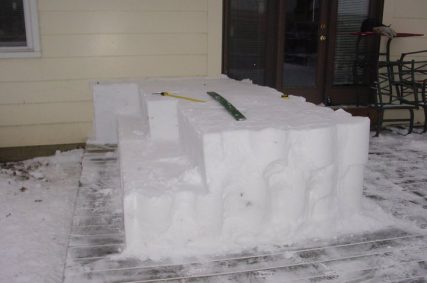 He set up three sets quarries out of plywood, where he would fill the snow and pack it down by walking on it. He then sawed 2-foot-long blocks out of the quarries, using a level to ensure accuracy.

“When I finished the structure, it warmed up–it was 6 above by the time I finished,” he said. “Very cold weather is ideal, however, as the blocks are more solid.”