(RNS) Folks who have just knocked back two drinks say they’re really aware of God at that moment.

And good sleep enhances a sense of God, joy, peace and love.

Actually, about 160 people, so far, know such details about their spiritual lives. They were the first participants in SoulPulse, a newly launched ongoing study of spirituality in daily life.

It’s an “experiential” research survey inspired by pastor/author John Ortberg and conducted by a team led by Bradley Wright, an associate professor of sociology at the University of Connecticut and author of “Christians Are Hate-Filled Hypocrites … and Other Lies You’ve Been Told.”

Twice a day for two weeks, participants receive questions asking about their experiences of spirituality, their emotions, activities and more at the moment the text messages arrive.

Were they feeling satisfied, loved, happy, hostile, sleepy or stressed? Were they more or less aware of God when they were commuting or computing or hanging out with family and friends?

The participants so far are too few and too similar to draw national trend data; they’re chiefly highly educated evangelicals who know Wright or Ortberg, pastor of Menlo Park (Calif.) Presbyterian Church and their friends. But Wright’s team aims to have 10,000 people enroll at SoulPulse.org over the next three years. Their answers will be aggregated to look for overall trends.

“The idea came to me because I’m interested in psychology, spirituality and the nature of the human condition,” said Ortberg, who also has a doctorate in psychology. 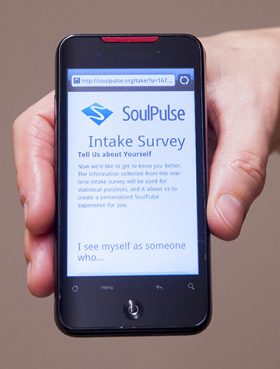 People can sign up at www.soulpulse.org for a two-week survey in which they’ll receive two daily questionnaires via text or email or both. Photo courtesy of Sean Flynn/UConn Photo

“Why do people change or not change? Why is change so hard? What do you need to know about yourself to become your best self? These seem like gaping holes in our knowledge.”

Ortberg said there are numerous studies on how to assess quantitative data about health, fitness, even happiness. But the same degree of scrutiny hasn’t been applied to spirituality.

“Your soul matters more than your body. So the ability to monitor your inner, deepest self, your emotional and spiritual well-being, with real-time, realistic information is very valuable,” Ortberg said.

People who don’t believe in God will be sent SoulPulse questions tailored to their participation. Although studies find one in five Americans say they have no formal religious affiliation, most of those “nones” are still interested in the spiritual dimension of life, he said.

“Spirituality ought to be handcrafted, not mass-produced on a spirituality assembly line,” said Ortberg.

SoulPulse participants will receive an individual report, reflecting their different temperaments and temptations. Ortberg said his personalized report has already changed his life.

“I discovered I was more tired than I knew that I was. I have begun going to bed earlier and I was tested for sleep apnea. I also realized, as an introvert, I’m more aware of God if I have a bigger chunk of quiet time. I started scheduling more time to be alone with God so when I am with people I can really be with them.”

The personal reports are color-coded interactive charts that can show, for example, that one person may be more aware of God — and emotions of love, joy and peace — midday on Wednesdays. However, the spiritual warm fuzzies chilled when that person was tired or multi-tasking.

Wright said one participant wrote in that “his spiritual low was watching his child’s soccer team get creamed by the opposition.” Another reported times of peak spirituality on Sunday mornings, at prayer and worship, and also if he had two drinks.

The SoulPulse eight-minute intake survey gets to know a participant beyond the usual demographic questions of age, race, ethnicity, education, income and religious identity. It also tries to assess psychological qualities such as whether someone says they have an “active imagination” or “tend to find fault with others” or have few artistic interests.

Once the twice-daily questions start arriving, people are asked to identify what they’re doing, who they are with, even the weather and how much sleep they’ve had, as well as questions assessing their state of mind emotionally and spiritually, said Wright.

No one is asked outright if they feel angry, cranky, or unhappy. But there are opportunities to report that “things are bothering you more than they usually would” or that you have “less mental and emotional energy than usual.”

“Everyone — well, almost everyone — is spiritual or religious. Now, we have an app to find out, what do they mean when they say that,” Wright said. “If we better understand spirituality and the good fruits of it, maybe we can promote it more.” 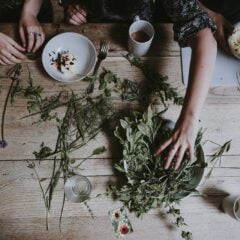 Martini Judaism
What happened on the 10th of Av? Judaism was rebooted.
Follow us on Facebook!
Submit your photos to RNS