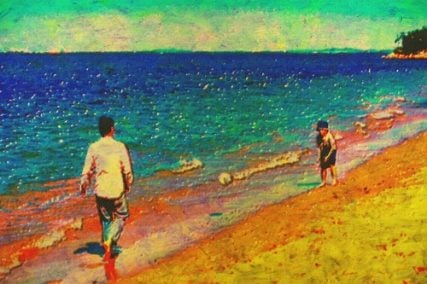 Painting of a father and son playing soccer on the beach.

(RNS) A once-popular book that links atheism with shoddy fathering is getting a second life with a new publisher, thanks, in part, to the rise of nonbelief in the United States.

“Faith of the Fatherless: The Psychology of Atheism” by Catholic psychologist Paul C.Vitz posits that “intense atheists” throughout history — Nietzsche, Voltaire and Madalyn Murray O’Hair — had absent or rotten fathers. This, he argues, damaged their ability to form a relationship with a heavenly father.

Vitz also holds that many notable believers — Renaissance man Blaise Pascal, anti-slavery activist William Wilberforce and Nazi martyr Dietrich Bonhoeffer, among others — had great relationships with their dads, and were therefore more able to build relationships with God.

“We need to understand atheism has a lot to do with our emotional attitudes towards life, other people and a lot of other things,” Vitz said from his office at the Institute for the Psychological Sciences, a Catholic graduate school in Arlington, Va. “I think that is an important thing for atheists and believers alike to take into consideration.” 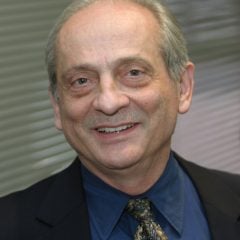 And consider it they have. When the book first appeared in 1999, it polarized critics. The religious media loved it. New Oxford Review, a Catholic publication, described it as “an engaging analysis of psychological factors in religious belief and disbelief.”

But the atheist and humanist media did not swoon. Skeptic magazine panned it as “insulting to those of us who came to a point of non-belief as the result of careful study and consideration.”

Still, the book struck a chord, especially among Christian groups who saw the collapse of the traditional family as a threat to their beliefs. Focus on the Family, a Colorado-based Christian ministry, used Vitz’s findings to promote its outreach to fathers, and he was cited by a host of Christian psychologists and scholars.

So why revise the book?

A lot has changed since 1999. For one, the first decade of the 21st century saw the rise of the so-called “New Atheists” — outspoken critics of religion such as Richard Dawkins, Christopher Hitchens and Daniel Dennett, whom many contemporary atheists credit for swelling the ranks of nonbelievers. 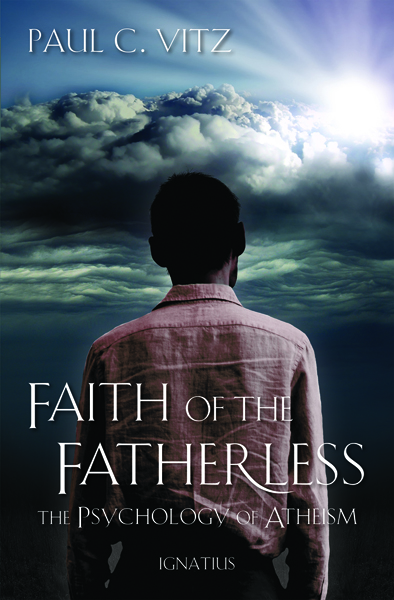 And their ranks have swelled. According to the Pew Research Center, the percentage of Americans who are atheists and agnostics has grown from 3.7 percent to 5.7 percent from 2007 to 2012, and the overall number of those who say they have no religion has grown from 11.6 to just under 14 percent in the same time period.

“The rise of militant, evangelical, fundamentalist atheism in our time adds to the pertinence of this book,” said Mark Brumley, president of Ignatius Press, the Catholic publishing house that has reissued the book.

“Some atheists try to equate atheism with rationality. Vitz’s book shows that atheism, like many belief systems, has significant irrational elements.”

Vitz said he wanted to revise the book not only to include the New Atheists, whose family relationships he scrutinizes (Dawkins was sexually molested by a clergyman, a subject he has discussed before), but also because there was new research about atheists and attachment theory (generally, they didn’t get much of it) and atheists and autism (many autistic people are also atheists, the book claims).

As he did in the first edition, Vitz makes an important point — the book does not try to prove or disprove the existence of God. Rather, its goal is to examine some of the “irrational” underlying reasons some people become atheists.

“I am certainly not predicting that every atheist is the result of one hypothesis, much less mine,” he said. “I am just saying there is a tendency for more things to go together than you’d expect normally,” like atheism and a poor relationship with one’s father.

The reaction to the book, again, has been polarizing. Christians love it — Paul de Vries, president of New York Divinity School, a Protestant school, praised it as “one of the most profound books in the empirical psychology of religion.”

But atheists are less enthusiastic. “I have a spectacular relationship with my father and consider him to be the most admirable man I’ve ever known,” wrote JT Eberhard, an atheist blogger for Patheos. Many of the comments on his review are unprintable.

Vitz, a Catholic who identified as an atheist in his youth, acknowledges there are exceptions to his theory. He identifies a big one in his book — Sam Harris, a New Atheist who hit the best-seller list with “The End of Faith,” has an apparently healthy relationship with his father, too.

“The best answer I have to explain that is I don’t know,” he said. “I haven’t studied them (the exceptions) enough.”