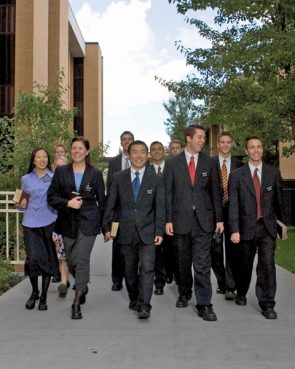 Missionaries at the Missionary Training Center in Provo, Utah. There are several training centers located worldwide. Photo courtesy The Church of Jesus Christ of Latter-day Saints

(RNS) David Stewart felt ill equipped to preach his Mormon faith in recently opened Russia in 1992, when he arrived there as a young missionary. Sure, he had learned the language, but nothing of the culture he was about to engage.

Stewart’s mission experience didn’t match the breathless tales of international growth he had read about in official church magazines, which, he says, focused on “inspiring stories of exceptional members.”

The earnest missionary also wondered why other religions — such as Seventh-day Adventists and Jehovah’s Witnesses — had so many more adherents than Mormonism and seemed to be better at reporting actual membership figures and retaining converts.

Such questions simmered in Stewart’s consciousness until 1999, when he launched the website cumorah.com to collect data on every country, including cultural traditions and LDS retention figures.

After a decade, Stewart, a Las Vegas physician, enlisted the help of Matt Martinich, an independent researcher who was a Mormon missionary in South Korea from 2004 to 2006. Martinich had conducted his own survey of LDS growth and published a blog — ldschurchgrowth.blogspot.com — on the topic.

The encyclopedic endeavor is based on official reports the Utah-based Church of Jesus Christ of Latter-day Saints gives out every year, information on the faith’s website as well as “literally thousands of reports we have obtained from members and church leaders over the years,” Martinich said.

In the almanac’s introduction, premier LDS sociologist Armand Mauss praised the undertaking’s independence, scope, candor and sources, and predicted it will be seen for years as “the most reliable and indispensable source available.”

It couldn’t come at a more opportune time.

Trevor North passes the sacrament to congregants during the service at The Church of Jesus Christ of Latter-day Saints – Lenexa Ward on Sunday (June 17, 2012) in Lenexa, Kan. RNS photo by Sally Morrow

Though both researchers are practicing Latter-day Saints, the LDS Church “cannot vouch for its contents or conclusions,” church spokesman Cody Craynor said. “Official church statistics and related context are continually updated at mormonnewsroom.org.”

Mormon leaders have conceded that member retention remains a problem for the faith and have invested considerable resources in trying to remedy it.

Here are some of the almanac’s findings: