(RNS) Viewers watching the American Football Conference championship game between the Denver Broncos and New England Patriots earlier this month may have seen a Best Buy commercial for a Sharp 60-inch television that seemed ordinary, but in one way was extraordinary. 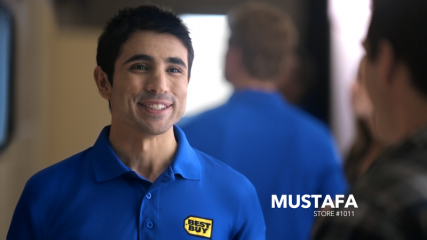 The ad shows a young, clean-shaven salesman named Mustafa talking about the television, advising customers and relaxing at home watching movies and football with his friends.

“I’m never going to get these guys out of here,” he jokes to his girlfriend at the end.

While the commercial never identifies Mustafa as a Muslim, many might assume that given his name, a diminutive for Muhammad. For viewers used to seeing negative images of Muslims on television, the commercial was a rare exception.

“He has all the right stuff,” said Timothy de Waal Malefyt, a longtime advertising executive who now teaches at Fordham University in New York. “He has a girlfriend. He has Anglo friends. And he’s watching ‘Despicable Me’ and football. It’s very American.”

Muslims in commercials are still rare, but that could be changing as the acceptance of Muslims accelerates across America.

The Best Buy commercial, scheduled to run through Feb. 1, sparked a flurry of Twitter chatter after it debuted.

“Well, hello Mustafa. I never see any guy who looks like that at my local Best Buy,” tweeted Vixen By Night.

Best Buy spokesman Jeffrey Shelman said the ad featured actual Best Buy employees, chosen based on their tech knowledge and on-camera performance. Mustafa is Mustafa Hakami, a native of Afghanistan who lives in Harbor City and is applying to medical school. He works one day a week at Best Buy’s El Segundo, Calif., store.

“I thought the people watching the commercial in their living room would see me like I could have been them,” said Hakami, whose girlfriend in the spot is his wife, Amber. “I see the same things they do, we run into the same issues, we’re all Americans here. So I did the commercial as Mustafa from America.”

While there have been other commercials with Muslim actors — Aasif Mandvi of “The Daily Show” has appeared for Domino’s Pizza and comedian Asif Ali has acted in Best Buy spots — there was no indication that the actors were Muslim.

The Best Buy spot, on the other hand, does make that suggestion, and it joins a rarefied group.

In 2011, Prudential released a series of commercials featuring Americans on their first day of retirement. One ad showed an older African-American man fishing, playing with toddlers, eating a meal with family. He also spelled out his name on the screen: Mujahid Abdul-Rashid.

For the 2012 Summer Olympics in London, Nike created a series of commercials called “Find Your Greatness” that ran in 25 countries. One 17-second spot showed girls huddling with headscarves under the lights of a soccer field, listening intently to their female coach speaking in Arabic. A female narrator with a British accent then says: “If we think greatness is supposed to look a certain way, act a certain way and play a certain way, we certainly need to rethink some things.”

The spot left an impression on Marium Mohiuddin, who once wore an Islamic headscarf as a sports-obsessed teen and now works as a spokeswoman for the Los Angeles-based Muslim Public Affairs Council.

“When I saw that, I thought, thank you for showing me as someone who likes sports, and who was part of a team, all while wearing the hijab,” she said. “It’s a powerful thing to see yourself reflected positively on television.”

Shahed Amanullah, an Internet entrepreneur and former State Department adviser on diplomacy to global Muslim communities, said the commercials don’t promote acceptance of Muslims so much as they point to an acceptance of Muslims that already exists a dozen years after the terrorist attacks of Sept. 11, 2001.

“Advertisers would not be doing this if the idea of a Muslim being a normal American would not play in Peoria,” said Amanullah. “The market is telling us that it isn’t weird anymore to see Muslim consumers behaving like any other Americans.”