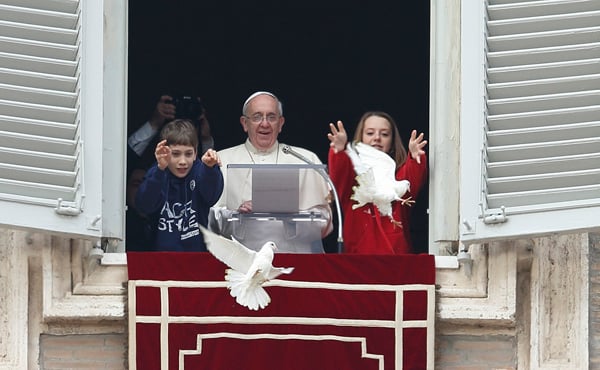 Pope Francis watches as children release doves from the window of his studio overlooking St. Peter's Square at the Vatican on Sunday (Jan. 26). The two young people at his side launched doves to highlight the church’s call for peace in the world. Photo by Paul Haring, Catholic New Service
January 28, 2014
Eric J. Lyman

ROME (RNS) After two doves released by Pope Francis and two young children were attacked by aggressive predator birds, a leading animal rights group called on the pontiff to stop what they called "outdated traditions." 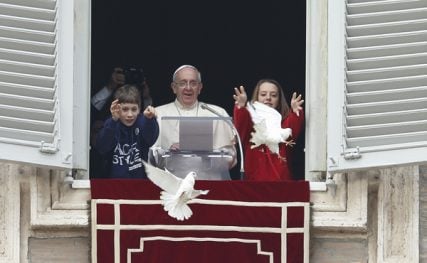 Pope Francis watches as children release doves from the window of his studio overlooking St. Peter's Square at the Vatican on Sunday (Jan. 26). The two young people at his side launched doves to highlight the church’s call for peace in the world. Photo by Paul Haring, Catholic News Service

The Vatican regularly releases doves as a symbol of peace, and in multiple instances they have been chased and sometimes captured and killed by more aggressive fowl in the area. But Sunday's (Jan. 26) events were more noteworthy because the scene of a seagull and a crow swooping in to attack the doves was captured by several of the photographers in St. Peter's Square as a crowd of tens of thousands -- including several thousand children -- looked on.

Both white doves managed to escape their predators after a brief tussle, but it's unclear what ultimately happened to them.

In an open letter, the National Animal Protection Agency in Italy said that because the doves are bred in captivity and lack strong survival instincts, releasing them into the wild as is often done at the Vatican "is like condemning them to certain death."

The statement called for the Vatican to change its policies: "Do not use animals and their lives any longer for these outdated traditions," the group said, adding that it planned to launch a petition to gather signatures in order to formally ask the Vatican to halt the practice.

The Vatican did not immediately respond to the call for change from the group, best known by its Italian initials ENPA.