(RNS) Sentenced for professing his atheism, Alexander Aan was recently released after 18 months in an Indonesian prison.

Masood Ahmad has already served over two months in a Pakistani prison for reading the Quran as an Ahmadi Muslim.

They are but a sliver of the ongoing persecution, including murders, of Ahmadi Muslims, Shiite Muslims, Christians, Hindus, and atheists at the hands of extremists claiming Islam requires death for apostasy and blasphemy.

The famous Indian poet Sarojini Naidu once wrote, “(Islam) was the first religion that preached and practiced democracy ….” A glance at the aforementioned atrocities and one wonders how Naidu arrived at her conclusion.

Naidu and countless scholars throughout history including George Bernard Shaw, Alphonse de Lamartine, Mahatma Gandhi, and Annie Besant arrived at similar conclusions by studying Islam’s authentic sources — the Quran and Prophet Muhammad. Both champion universal freedom of conscience and free speech. Nothing in Islam endorses, much less commands, death for apostasy or blasphemy, or vigilante justice for childish cartoons.

Regarding blasphemy, the Quran implores Muslims at least seven times that if offended — ignore and move on: “And when thou seest those who engage in vain discourse concerning Our Signs, then turn thou away from them until they engage in a discourse other than that.”

Regarding free speech, the Quran recognizes and protects free speech and expression in more than 40 instances.

Muhammad’s example as Medina’s ruler echoes this teaching. Muhammad forgave and led the funeral prayer for Abdullah bin Ubay bin Salul, who was guilty of sedition and also advanced the slanderous claim that Muhammad’s wife Aisha was not chaste. Let alone capital punishment, Muhammad did not order any punishment and permitted free speech.

Muhammad established the Charter of Medina, a secular constitution between Muslims and Jews. The charter ensured equality, universal religious freedom, and free speech for all Medina’s residents.

Islam limits free speech on the same premise that the U.S. Supreme Court has also banned the utterance of inflammatory speech. Punishment is warranted if an individual threatens the state due his advocacy of terrorism or incitement to pre-emptive war. It is upon this premise that citizens were punished in Muhammad’s time — be they Muslim or Jewish. At least 15 European nations have laws punishing certain types of blasphemy — something Islam’s original sources do not have.

But what of those allegedly violent Quranic verses that declare “kill them where ye find them?” Yes, any six-word excerpt can seem violent when the reader is not aware of the context.

In Chapter 22:41 the Quran explains, “Permission to fight is given to those against whom war is made, because they have been wronged ….”

The Quran then specifically obliges Muslims to protect, “churches, temples, synagogues, and mosques” from destruction.

Thus, Islam permits defensive battles to ensure universal freedom of conscience. The proper context of “kill them where ye find them,” therefore, is in self-defense to kill those who persecute and kill others for their faith. Moreover, the Quran further commands Muslims “but if they desist fighting, then you too desist,” demonstrating that Islam actively requires reconciliation.

Furthermore, Islam’s rules of war are more advanced, compassionate, and humanitarian than anything any nation on Earth today employs. Even in self-defense, Muslims may only engage those actively engaging them first. Islam categorically forbids treachery; mutilation; killing women, children, or the aged; burning trees; slaying livestock; or harming monks and ministers. Thus, concepts such as drone strikes, nuclear attack, or collateral damage all violate Islam’s rules of war.

Far from the barbarism of Taliban and some Muslim-majority regimes, Muhammad’s example of compassion is unmatched. He peacefully endured persecution for a dozen years in Mecca, then fled to Medina to escape an assassination attempt, and finally fought defensive battles on the outskirts of Medina. After the Meccans broke yet another peace treaty, Muhammad marched back to retake Mecca.

Mecca surrendered immediately, leaving Muhammad as the de facto ruler. With the city in hand and the opportunity to exact retribution on all those who murdered his family and companions — Muhammad did something incredible. He declared to the Meccans, “I speak to you as Joseph spoke to his brothers. This day there is no reproof against you. You are free.”

This was Muhammad’s unbreakable allegiance to justice and universal freedom of conscience.

This Islamic spirit of justice still exists today. In 1900 Mirza Ghulam Ahmad, founder of the worldwide Ahmadiyya Muslim Community wrote, “If (religion) has to make up for its weakness in argument by handling the sword, it needs no other argument for its falsification. The sword it wields cuts its own throat before reaching others.”

Likewise His Holiness the Khalifa of Islam Mirza Masroor Ahmad recently declared, “Khilafat has no relation to government or politics. We believe entirely in a separation of religion and matters of state.”

The Quran is clear: “There shall be no compulsion in religion.” Thus, in stripping Alexander Aan, Masood Ahmad, and Saeed Abedini of their freedom of conscience, Indonesia, Pakistan, and Iran have only succeeded in stripping Islam of its most noble quality. 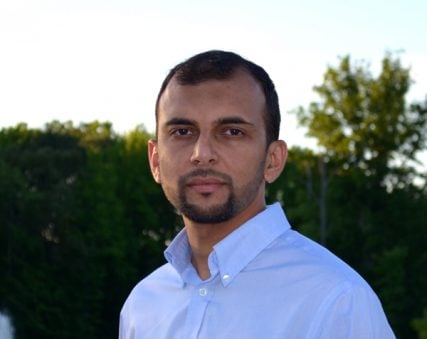 Qasim Rashid is the author of the critically acclaimed book, The Wrong Kind of Muslim. He is a national spokesperson for the Ahmadiyya Muslim Community USA. Follow him @MuslimIQ. Photo courtesy of Qasim Rashid

(Qasim Rashid is the author of the critically acclaimed book, The Wrong Kind of Muslim. He is a national spokesperson for the Ahmadiyya Muslim Community USA. Follow him on Twitter @MuslimIQ.)