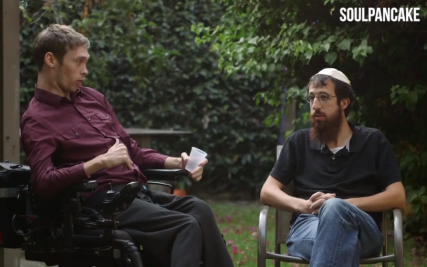 Comedian Zach Anner opened the first episode of his popular SoulPancake web series Have a Little Faith with a surprising statement:

“I have a confession: I have no faith.”

Anner may not be religious, but he wants to understand faith. Have a Little Faith chronicles his attempts to do so.

When it comes to religion, 29-year-old Anner doesn’t label himself. He falls into the “none” category—making him one of a growing number of millennials who do not claim a religious identity. “Nones” are perhaps the fastest growing “religious” category in the United States, with around 1 in 3 Americans under the age of 30 now declining to identify with a religion.

For Have A Little Faith, Anner—who lives in Los Angeles and won “Oprah’s Search for the Next TV Star” contest in 2012—visited religious communities and asked people to talk about their beliefs. The result: a frequently hilarious, thoughtful, and probing exploration of lived religious experience in the U.S.

In advance of Have a Little Faith’s second season—tentatively scheduled to premiere later this month, Anner tells me it will include an episode on atheism—I spoke with Anner about his views on religion, his religious upbringing, how he related to a Muslim woman he interviewed, what he learned about love from a gay Quaker, and more.

Chris Stedman: In a Q&A video about season 1, viewers asked if creating Have a Little Faith changed your perspective on religion and God. You said that the series had “restored [your] faith in humanity” but that “the jury is still out” regarding the rest. Can say more about your own views and your personal history with religion?

Zach Anner: Growing up, my grandmother was a church organist at a Protestant church. We were the type of family that would go on Easter Sunday, sometimes on Christmas Eve, and occasionally throughout the year—but it never really went much deeper than that. So I always sort of felt like an outsider, and I just had too many questions. In fact, I went to Sunday school a couple of times and I think the teacher actually came up to my mom afterwards and said, “He has too many questions.” I still have that inquisitive nature, which is kind of what drives the show.

CS: So you don’t identify with a specific label?

ZA: I think part of the reason why [I’ve been] able to have these discussions with people is because they know that I’m still searching. I didn’t want to put a label on [what I believe] just yet because I’ve got so much searching left to do… This show has inspired me to be as open as possible to listening and experiencing things without necessarily putting it under a specific umbrella—at least not yet.

CS: How have people responded to the series?

ZA: There’s always going to be some hate on the Internet. But it’s been really heartwarming to see people from all faiths and beliefs having logical and measured discussions, and saying that there’s a lot of common ground. My favorite comments are the ones where people say, “I had no idea that this would resonate with me, but it does.” And I think for me the show is just as much about exploring faith in religion as it is about having faith in people—that they can have a productive discussion on deeper issues with one another without getting into like a shouting match or something that you’d see on a 24 hour news channel.

CS: Of course, not all of those discussions are going to start from a place of understanding. In the introductory video for Have a Little Faith, you asked random people about religion. Some of the reactions were quite revealing, such as when you asked people what they thought about Islam—one person simply responded with the word ‘scary’ and another said ‘I have no idea.’ Why do you think it’s important for people to know more about religion, and to know people with different religious identities?

ZA: What I don’t like about the way the media portrays religion is that they seem to weaponize it and use it as a tool to divide people, and I thought [that there must be] a much more positive way to go about asking questions about religion. I feel that religion can be used as a tool to guide your life and help you connect with other people, but if it starts shutting you off from other parts of the world—if it eliminates an entire scope of people from your life and [causes you to] say, “I know what those people are like, I’m not like them, and we wouldn’t get along”—well, that’s the barrier that I’m trying to break down, because I think it’s so important to at least try to understand people’s sacredly held beliefs. If we just ignore them then we’re missing out on a really important discussion.

I grew up with a disability [Editor’s note: Anner has cerebral palsy], and to me the worst thing was when people were nervous to say the wrong thing or ask a question that they thought might be offensive—so they wouldn’t talk to me. I’ve always said I would much rather you ask the wrong question that comes from an honest place than you not talk to me at all.

That was kind of where [Have a Little Faith] came from. I just went in and said to people, “Okay, I’m completely ignorant. Try to explain it to me like I’m a five year old.” Then people know that I’m not coming from a judgmental place—I just don’t know. And I think that, especially with Islam, people have these very strong emotional reactions that are based in an incredibly limited realm of experience. I think that’s what I really wanted to get away from: making judgments before you even know what the core beliefs of the faith are all about. You can’t judge an entire religion by a few of its members. 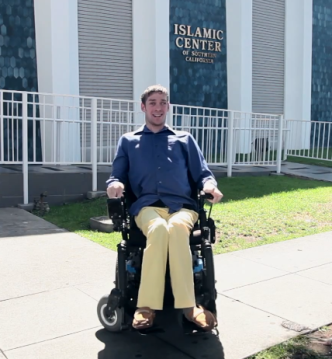 [Meeting people] and just having a conversation, instead of coming at it from a judgmental place from the start, was really important to me because I know from being disabled that people have their misconceptions. They have their ideas when they just look at me, and I could relate to that. When I was talking to Marwa [Abdelghani, a Muslim Youth Group Director interviewed in the second episode of Have a Little Faith] about how she would get judgments from people on the street because she wears the hijab and is Muslim, I connected [with her] on that level because I know what it’s like to be judged based on how you look. And I thought that, coming from growing up using a wheelchair and all that stuff, I had a unique perspective that could help break down those barriers a little bit.

CS: You’ve said that you decided to do this series in order to educate yourself. Now that you’ve wrapped up season 1 and are heading into season 2, what are some of the things you learned that surprised you? Moved you? Impacted you most in your day-to-day life?

ZA: I’ve had several experiences doing this show that touched me in a way that I never expected. I think what I’ve been most impressed by is that all of the people that I’ve talked to, whether it’s a Baha’i person or a Mormon, [are] people that I’d consider friends now… This show has taught me is that there’s something that all people have, whether you’re an atheist or religious—there’s something at the core that allows you to connect with that person. And even when you get into the disagreements on very important issues, that doesn’t mean that you can’t still enjoy that person and learn from that person.

When we did the Quaker episode, we talked to a man who had just lost his husband, and I was able to learn more about the nature of what it means to truly love somebody in that interview than I have in most of my 29 years. Unfortunately, the Quaker gentleman we interviewed passed away recently. Being able to spend that time with him and get to know him a little bit really made me understand that it’s important to try to connect with as many people as you can on as deep a level as you can, because you always have something to learn. It may not be a direct, “Oh, this is what I learned about religion,” but I’ve learned so much about people from doing this show. I’ve been so astounded with how willing people are to connect with you when you give them the chance. If you don’t come from a place of judgment, you have a much richer experience, and it’s been wonderful to feel that while making this show.

News
Black skeptics find meaning in uplifting their community through social justice
News
In Oregon, churches and anti-fascists unite to provide mutual aid to fire evacuees and others in need
Opinion
Building interfaith community at work
News
600 faith leaders sign letter urging California governor to stop transfer of incarcerated people to ICE
Opinion
From King to Gandhi, racial justice brings faiths together
© Copyright 2020, Religion News Service. All rights reserved. Use of and/or registration on any portion of this site constitutes acceptance of our User Agreement and Privacy Policy, Privacy Statement and Cookie Notice. The material on this site may not be reproduced, distributed, transmitted, cached or otherwise used, except with the prior written permission of Religion News Service.