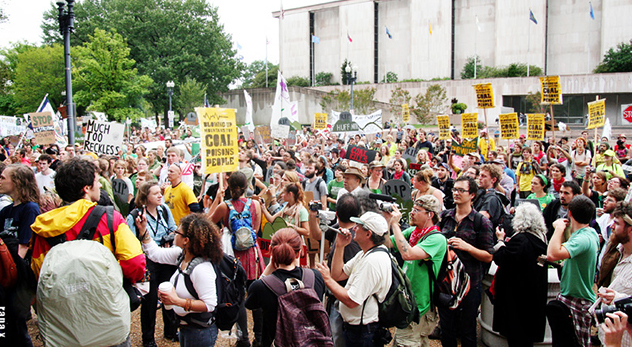 A protest during Appalachia Rising’s day of action in September of 2010. Yellow signs throughout the crowd proclaim, “Blowing up mountains for coal poisons people.” – Photo by Rana Xavier (http://bit.ly/1k5Vr2K)

“When not in use, turn off the juice.”

More than a catchy rhyme, this was a motto in the Merritt household when I was growing up that reminded us kids to turn off the lights upon leaving a room. I suspect the motto was enacted by my parents as a money saving strategy, but unbeknownst to me, it was also helping me love my neighbors.

Sixty-eight percent of electricity generated in America comes from the burning of fossil fuels, with nearly forty percent attributed from coal. The burning of coal is partly responsible for America’s spiking asthma rates, and it releases toxic mercury into surrounding rivers and lakes. Additionally, mountaintop removal (MTR) coal mining, a process for extracting coal that uses powerful explosives to level mountains layer by layer, is wrecking lives through air pollution and the creation of sludge and slurry ponds.

As it turns out, your power bill is inextricably connected to loving your neighbor.

Most Americans aren’t aware of the connection, but they will be soon if Peter Illyn has anything to do with it. Illyn is founder and executive director of Restoring Eden, a Christian non-profit promoting “the biblical call to love, serve, and protect God’s creation.” He and his organization have been mobilizing Christian college students over the last three years to perform health surveys throughout Appalachia, the region where MTR is most frequently practiced.

To execute this project, Illyn collaborated with Dr. Michael Hendryx, chair in the Department of Health Policy, Management, and Leadership at West Virginia University. Together, they have mobilized and trained students from leading Christian colleges such as Calvin College, Samford University, Wheaton College, and Lee University to conduct hundred of health surveys throughout West Virginia and Kentucky. Their findings provide startling information about how energy consumption effects our Appalachian neighbors.

The data, which has been published in the peer-reviewed “Journal of Community Health” and “Journal of Rural Health” reveals a much higher rate of illness—particularly heart disease, cancers, and birth defects—and mortality among individuals living in MTR regions. Additionally, data published by Hendryx in “Ecopsychology” shows that those in coal mining areas of Central Appalachia experience an increased risk of depression. 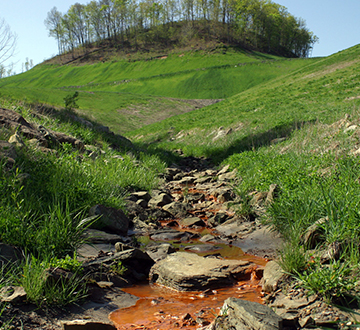 Coal companies frequently tout the benefits of reclamation and claim their practices protect and restore water quality. The red-stained water seen below this “reclaimed” mountaintop removal mine in Magoffin County, Kentucky, tells a very different story. Red water like this results from high iron levels, which in turn are an indicator of a plethora of other heavy and toxic metals like selenium, mercury and manganese. – Photo by Matt Wasson, Appalachian Voices – (http://bit.ly/1fq0SE3)

Illyn says the coal industry has launched a $15,000,000 campaign to discredit the growing pool of health studies uncovering the impacts of coal mining on humans, but the researcher involved have taken steps to reduce unintentional bias. The surveys utilize historic questions used by the Centers for Disease Control in past studies, and they are divided between control and impacted communities. Additionally, each survey goes through an internal review by a board comprised of university professors before it can be approved. This year, students will be certified by the board to increase confidence in the results.

Though Illyn admits that he has a vested interest in the issue as the head of a Christian environmental organization, he says that his motivations aren’t influencing the results.

“We’re not overtly political, and we’re not overtly anti-coal,” he says. “We’re overtly asking a question: ‘Does living near a mountaintop removal site negatively affect one health?’ If that answer is ‘yes,’ then I think Christians must answer what that means in terms of how we promote justice through our energy use.”

Illyn is right. But as I’ve learned in my own environmental work, he is fighting an uphill battle to get American Christians to care. Environmental issues like climate change and MTR have become politicized and labeled “liberal” issues. Since many American Christians are politically conservative, they are often allergic to environmentalism, even when it directly connects to those neighbors that Jesus has called us to love.

In this case, it is difficult to ignore the ways in which our wasteful energy habits are negatively effecting our brothers and sisters in Appalachia (coincidentally, some of the poorest communities in America). Though Americans comprise about five percent of the world’s population, we are responsible for nearly 19 percent of the world’s total energy consumption. The only country that uses more electricity than the United States is China, a nation with a billion more citizens.

When you fail to flip a switch—to “turn off the juice,” as we might say in the Merritt house—you’re really failing to love your neighbors. Every time we needlessly leave a light on or postpone installing more efficient light bulbs and appliances, we are contributing to the problem. The billboards in Appalachia don’t lie: “Coal Keeps the Lights On.”

“We are not doing a good enough job as a country to talk about how we need to conserve,” says Bill Price, the Sierra Club’s point-person for Appalachia. “Once we get serious about conservation and efficiency, we are going to see a decreased demand in coal.”

Yet, turning off lights is not the ultimate solution to this problem. Sweeping problems require sweeping solutions. We need to get more serious about developing and using alternative sources of energy in America. (In the conservative Southeast, for example, only 0.1 percent of electricity comes from renewable sources of energy like wind or solar.) And we should urge lawmakers to support the Clean Water Act, which protects those who are affected by spoiled water as a result of mountaintop removal but has been weakened by recent court decisions.

As more data is made available about the impacts of our energy consumption, Christians must begin living and advocating with their neighbors in mind. Energy use is not just a matter of money, but also an issue of justice, compassion, poverty, and the glory of God displayed through creation. Christians will get serious about energy use and policy once they get serious about loving those neighbors who are most directly affected by it.