(RNS) A priest who headed a leading treatment center for clergy with sexual and addiction problems has agreed to plead guilty to charges of stealing money from his home diocese in New Hampshire and from a Catholic hospital and the estate of a deceased priest. 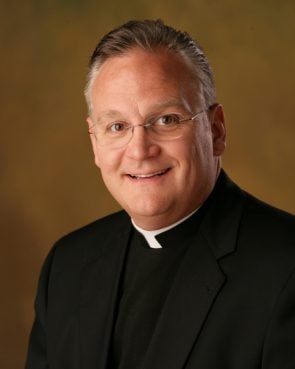 Monsignor Edward J. Arsenault, president and CEO of St. Luke Institute, resigned in the wake of an investigation into an alleged inappropriate adult relationship and the uncovering of possible illegal financial dealings in the Diocese of Manchester, N.H.  Arsenault is pictured in a 2008 photo. Catholic News Service photo/courtesy of the Rev. Edward Arsenault

Monsignor Edward J. Arsenault, who resigned as head of the St. Luke Institute outside Washington, D.C., when the charges were revealed last year, will spend at least four years in a New Hampshire prison under a plea deal with prosecutors announced on Monday (Feb. 3).

For a decade, Arsenault held a number of senior positions in the Diocese of Manchester and was a top aide to former Bishop John McCormack, who came under intense criticism for his role in the clergy sexual abuse scandals.

In 2009, Arsenault took a $170,000-a-year position as CEO of St. Luke’s, a rehab center in Silver Spring, Md., that became known for treating priests who had sexually abused children. The center deals primarily with priests, nuns and brothers who have a range of other issues, such as depression, anxiety and addictive behaviors. St. Luke’s conducted an internal investigation and found no evidence of fraud while Arsenault was there.

During his time in New Hampshire and for years afterward, prosecutors say, Arsenault was siphoning money from the diocese and through a consulting contract he had with Catholic Medical Center, a leading hospital in the state. Authorities say Arsenault was also stealing from the estate of Monsignor John Molan, a Manchester priest who died in 2010.

Prosecutors did not say how much money Arsenault stole, only that it was in excess of $1,500 from each source, the threshold for a felony charge. More details will be revealed when the priest formally pleads guilty in an April 23 appearance before a judge. Prosecutors said Arsenault cooperated with the investigation.

In an open letter published Tuesday by the Concord Monitor, Arsenault apologized to his bishops, his fellow priests and to New Hampshire Catholics for his failings. “I broke the law and violated the trust of others,” he wrote. “I am prepared to accept the consequences for having done so, to make restitution and to face the penalty for having committed these crimes.”

The diocese and the hospital referred questions about the case to the district attorney because the case is still ongoing.

The Manchester diocese said last May that the investigation began in early 2013 when church officials received a report that Arsenault was involved in a “potentially inappropriate adult relationship.” The diocese’s brief statement this week made no mention of that accusation or whether the current bishop, Peter Libasci, would move to defrock Arsenault.