(RNS) Facing criticism that he does not give religious freedom enough attention, President Obama devoted most of his National Prayer Breakfast address to the issue, naming people imprisoned for their beliefs and calling out specific nations.

“We believe that each of us is ‘wonderfully made’ in the image of God,” Obama said. “We therefore believe in the inherent dignity of every human being — dignity that no earthly power can take away. And central to that dignity is freedom of religion.”

“It is not always comfortable to do, but it is right,” Obama said. “When I meet with Chinese leaders — and we do a lot of business with the Chinese — I stress that realizing China’s potential rests on upholding universal rights, including for Christians, and Tibetan Buddhists, and Uighur Muslims.”

He noted the names of two Christian men imprisoned for their beliefs:

He also emphasized the freedom to have no faith. And he criticized blasphemy and defamation laws that have been used to suppress religious minorities. Asia Bibi, a Christian convicted of blasphemy by a Pakistani court, is one such person, though she was not named by the president. She received a sentence of death by hanging.

The president praised Secretary of State John Kerry’s peace efforts in the Middle East, saying, “We will continue to stand against the ugly tide of anti-Semitism that rears its ugly head all too often.”

Obama noted his upcoming meeting with Pope Francis. “Like Matthew, he has answered the call of Jesus, who said ‘follow me,’ and he inspires us with his words and deeds, his humility, his mercy and his missionary impulse to serve the cause of social justice,” Obama said of the pope.

Obama’s address was perhaps the most robust presidential statement on international religious freedom in U.S. history, said Judd Birdsall, a former U.S. diplomat who writes and speaks on religious freedom.

“It’s clear that the president views religious liberty not as an isolated, nice-to-have human right, but as a national security priority that is intimately tied to a range of foreign policy objectives,” Birdsall said. “The challenge for Obama now is to quickly nominate a qualified religious freedom ambassador and to demonstrate some tangible, meaningful successes in his religious freedom agenda.” 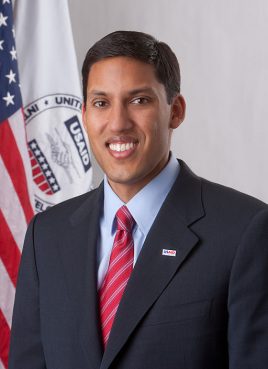 Focusing on extreme poverty, U.S. Agency for International Development Administrator Rajiv Shah provided the keynote address, a departure from previous prayer breakfast speakers who have typically come from outside the administration — people such as Mother Teresa and Bono.

Prayer breakfast organizers could be making up for the past two breakfast speakers, who both called out Obama in his policies. Last year, Johns Hopkins pediatric neurosurgeon Ben Carson’s address drew controversy for criticizing the Affordable Care Act and other policies. In 2012, Christian author and speaker Eric Metaxas criticized policies on abortion.

In addition, prayer breakfast speakers have traditionally been Christian. They include former British Prime Minister Tony Blair and National Institutes of Health Director Francis Collins — both outspoken about their Christian faith.

Shah is Hindu, though he noted his involvement in Senate prayer meetings and drew on the teachings of Jesus and Pope Francis in his remarks.

Foreign aid has been a target of those who want to cut federal spending, and in an effort to combat poverty worldwide, Shah has enlisted faith-based groups.

He has spoken on the need for faith-based organizations to be involved in international aid and has met with organizations such as World Vision and Compassion International. Shah was scheduled to speak at the evangelical conference Catalyst in October before the government shutdown precluded his appearance.

“Let us work together to end extreme poverty in our lifetime because this is achievable,” Shah said in his address.

Professional surfer Bethany Hamilton, whose life was made into the movie “Soul Surfer,” read two passages from the New Testament and spoke about her recovery after she lost her arm in a shark attack as a teenager. Haitian President Michel Martelly and Albania’s President Bujar Nishani were among the several thousand guests. 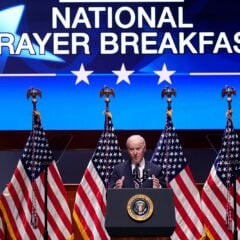 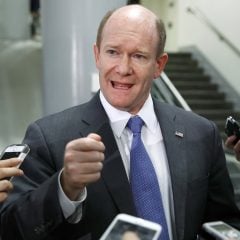 News
Biden, former presidents urge Americans to forgive and unite at National Prayer Breakfast
Follow us on Facebook!
Submit your photos to RNS